Patriarch Porfirije of Serbia: During the NATO Bombing, Serbs Set an Example of Christian Love for Neighbor 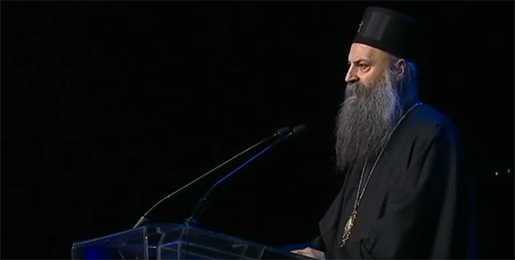 On March 24, 2021, an evening of remembrance was held in Belgrade, dedicated to the mournful date – the beginning of the bombing and NATO aggression against the Federal Republic of Yugoslavia in 1999, the Pravoslavie.ru reports.

His Holiness Patriarch Porfirije of Serbia took part in the memorial evening. The Primate of the Serbian Orthodox Church addressed the audience with the following speech:

“Before I went to this place tonight, I opened the New Testament and found myself at the beginning of the seventh chapter of the Gospel of Matthew where it says: Do not judge, or you too will be judged. I came here with the feeling that we had gathered not to judge but to remember and say what was true.

We have gathered to remember together, nationwide, the Church says in unison, those unfortunate days from twenty-two years ago. Above all, let us remember and pray for innocent victims; and our victims are innocent, because our people, it is clear all over the world today, defended themselves from aggression. We remember our soldiers and policemen, giant heroes from Kosare, Pastrik and other battlegrounds; of our celestial knights – pilots, then innocent civilians – victims of cluster bombs in Nis and throughout Kosovo, Metohija, Montenegro, the killed in a passenger train in Grdelica gorge, killed on the streets and squares of our cities, factories, hospitals, in the TV station, perished children … We remember everyone, we pray for everything, and I am sure that we should pray for them, because God wrote them in the book of eternity, the book of eternal life, and the names of many victims during those 78 days can be and they should be inscribed in the calendar of the Orthodox Church.

Tonight, however, I want to point out that in those 78 days, in our people, not only those who were the defenders of the bridges in Novi Sad, in Beska, in Belgrade – but also in others, who were bombed with children and families sheltered in basements, shelters then manifested one essential feature and virtue of our ethos, a precious part of our identity, and that is mutual solidarity, in a word, Christian love for neighbour. In those days, we shared with each other everything that was necessary and everything that we had.

That love, even courage, true heroism, manifests itself again in these months of suffering from the epidemic. Now the knights are doctors, nurses, all medical workers; then, in their own way, many employees in public services, women working at cash registers in supermarkets, and many others …

That love, even courage, true heroism, manifests itself again in these months of suffering from the epidemic. Now the knights are doctors, nurses, all medical workers; then, in their own way, many employees in public services, women working at cash registers in supermarkets, and many others …

We have been sustained by the Christian attitude towards life, the Christian way of life; the Christian love that Saint Sava and all the saints from the Serbian kin taught us. A soldier or an officer, after the war or in peacetime when he finally arrives home, or now a doctor from a clinic, a factory worker, a clerk – when they are greeted at home by a healthy family – wife, children, these are the foundations of a healthy society, survival and progress of the people and the state. The state, and with it the Church, should and must take care to preserve, through education and culture, along with economic development, what has been the identity of our people for centuries.

That is why we came here, not to judge and condemn, but to remember the innocent victims of the bombing that lasted 78 days, which was carried out by the NATO alliance in our area. We gathered to pray for those victims, but also to pray to God and for all those who are bad-tempered in general, but also in relation to us, to become of a good faith.”