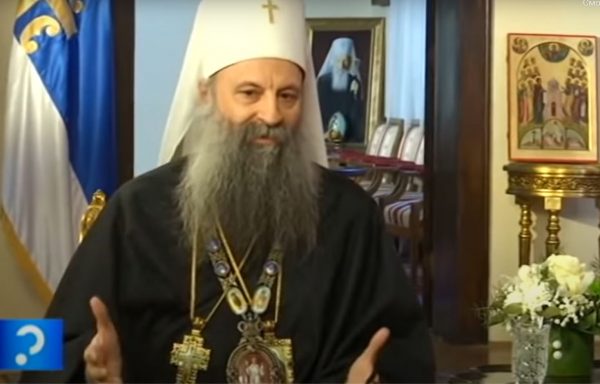 In his interview to the Serbian national television RTS, His Holiness Patriarch Porfirije of Serbia spoke about many issues, including the situation in the Serbian Orthodox Church, the dialogue with the Catholic church, the relationships between Moscow and Constantinople, and the Ukrainian issue.

Concerning the Ukrainian issue, His Holiness Patriarch Porfirije said that the Serbian Orthodox Church is an Autocephalous church that has its internal order and follows the Canon at this moment.

“The actions of Constantinople in Ukraine are not in accordance with the tradition of the Church. We are on the side of order and canon,” said Patriarch Porfirije.

He also added that “Many are going to say that we (the Serbian Orthodox Church) are on the Russian side. But we are on the side of order and canon.”

Answering the question about Pope’s possible visit to Serbia, he said that it depends on many factors.

“I will not think alone. Everything is a product of assembly thinking… As far as I know, there has never been any initiative by the Vatican… and Patriarch Irinej said that it would be good and useful for the relationship between the two churches, but whether [it will happen] and when… [only] God knows.”

Commenting on problems in the Serbian Orthodox Church, he said that, although he is not a prophet, “similar actions, like the ones in Ukraine, will not happen again, because it caused great upheavals in the relations between the Local Churches. And that will be a lesson for everyone.”

In his interview, Patriarch Porfirije said the Church should only engage in politics in the original sense, in the sense of caring for the common good.

When he was asked about same-sex marriage, Patriarch Porfirije said that for the Church marriage is defined in the Old Testament between the first man and woman.

He added that the Church needs to communicate with everybody, to try to solve problems, and, primarily, to bear witness to the faith in the Lord Jesus Christ.