Patriarch says he will discuss Middle East Christians with pope

Source: National Catholic Reporter
All ecumenical partners must be willing to allow for difference, and to face difference without fear, knowing that the God who made us different loves us all the same. Our responsibility is to "speak the truth in love" to one another, even if it hurts.
Natalya Mihailova | 10 May 2014 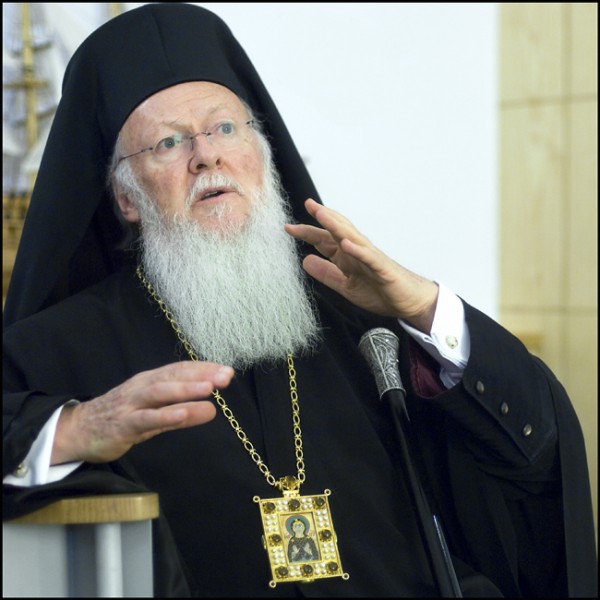 Vatican City – When Ecumenical Patriarch Bartholomew of Constantinople meets Pope Francis in Jerusalem May 25, one of their main discussion topics will be the “diminishing Christian minorities in the Middle East,” the patriarch told Catholic News Service.

“The urgency is upon us,” he said.

The patriarch replied May 9 to a series of written questions submitted by Catholic News Service. Among the topics addressed were his views of the three popes he has known since his election in 1991; resistance to ecumenism within his own Orthodox ranks; the possible convergence of Catholic and Orthodox practices on marriage; and tensions among Christians amid the current turmoil in Ukraine.

Q: What is the significance of your upcoming meeting with Pope Francis in Jerusalem, particularly in terms of promoting closer relations between the churches and more effective cooperation on issues of common concern? Can you tell me any of the topics that you expect to discuss with Pope Francis and why?

A: The meeting of the pope and the ecumenical patriarch in Jerusalem 50 years after the historic encounter of our ever-memorable predecessors, Paul VI and Athenagoras, should not be underestimated by anyone. Since that groundbreaking meeting, tremendous strides have been made in the relations between the Orthodox and the Roman Catholic Church. Together, we have envisioned the real possibility of a fully shared ecclesial life, which is our vocation in Christ. The dialogues of love and truth that followed that fateful beginning have made important breakthroughs, even though the final goal of full and unbroken communion is yet to be achieved. But as in all worthy endeavors, the journey is as important as the goal. Therefore, we and Pope Francis have committed to this sacred pilgrimage to the holy city of Jerusalem, to manifest the fraternal bonds between us, who are the successors to the holy brothers of Galilee, Peter and Andrew. There, in Mother Sion, we shall bear witness to the faith of Christ in the place where such faith was born. Now, more than ever, our fervent support of the diminishing Christian minorities in the Middle East is most vital.

Q: How would you characterize your relations with each of the three popes whom you have known since your election in 1991? What distinctive qualities has each pope brought to the dialogue between the Orthodox and Roman Catholic Churches?

A: As ecumenical patriarch, we have had the great privilege to work with John Paul II, Benedict XVI, and now His Holiness Francis. And indeed, we knew Paul VI as a young student in Rome. In the common ministry to manifest the unity of the faith in the bonds of peace, righteousness and humility, we have worked together with each pope, who in their inimitable ways each brought gifts of Christian love, fraternal spirit, and clear-sighted leadership to the vineyard of the Lord. Pope John Paul II, newly canonized by the Roman Catholic Church, brought a passion for the presence of the Gospel in every aspect of the human family. Hence he was most energetic in pursuing dialogue and outreach. Pope Benedict, who was a theological pillar to his predecessor, continued the trajectory of ecumenical outreach with a vigorous theological critique. This approach has been like a refiner’s fire in melting away extraneous arguments and leaving the substantial issues clarified for all. And now with Pope Francis, we behold a visionary and a prophetic witness to the truth of the Gospel, who is unafraid to confront the very difficult obstacles that block the path. As ecumenical patriarch, humbly serving the first throne of the worldwide Orthodox Church, we see the providence of God in the progression of these unexcelled leaders of the Church of Rome.

Q: In your encyclical of Feb. 21, 2010, you strongly criticized some Orthodox Christians’ resistance to ecumenism. Does such resistance pose a significant obstacle to dialogue with the Roman Catholic Church? What are some other challenges that the ecumenical movement faces today?

A: All Orthodox autocephalous churches have agreed in engaging the theological bilateral dialogues with the other Christian churches. We are continuing in the same way to bear witness with our Orthodox faith so that “all may be one.” We are called by the apostle to “speak the truth in love.” So when we call out brethren for their lack of love and of commitment to the wholeness of the Gospel, we do so with love, knowing that only love can remove the knots that bind the human heart in fear. For resistance to encounter with the other is ultimately based in fear. And fear, left to its own devices, can degenerate into hatred and even violence. Why else do we see religious war rearing its terrible face in the world today? Is it not because fear of the other has succumbed to the most primal instincts? In the ecumenical enterprise, without an unconditional acceptance of the other’s right to his or her own self-understanding, dialogue becomes monologue, a one-sided soliloquy of fear mongering and prejudice. But this does not mean acceptance of anything at every turn. All ecumenical partners must be willing to allow for difference, and to face difference without fear, knowing that the God who made us different loves us all the same. Our responsibility is to “speak the truth in love” to one another, even if it hurts. Thus, the progress of the ecumenical movement may be slow, but the progress is genuine.

Q: Pope Francis has called two synods to discuss various aspects of the pastoral care of the family, including the situation of divorced and civilly remarried Catholics. Some have suggested that changes in this area could bring the Roman Catholic Church closer to Orthodox practice on marriage. Could such changes serve to promote better relations between the churches?

A: Although the approaches differ, we have the same views on marriage and the Christian family. However, the Orthodox Church has recognized divorce by applying “economy” into the pastoral practice of the church. The Roman Church has its own traditions of pastoral discipline, but we know that there have been differing usages in the church throughout history. Divorce, even in the early church, was known, as both the Gospels and Epistles attest. What is most significant is that Pope Francis is squarely facing the realities of Christ’s flock, and in imitation of Jesus the good shepherd, leading the flock with compassion and grace.

Q: How does the predicament of Christians in the Middle East today affect ecumenical dialogue? Does it increase the urgency of better relations between the churches?

A: The predicament of our brothers and sisters throughout the Middle East — whether it be our Coptic brethren in Egypt or the Christian Orthodox, Armenian, Syriac, Melkite, Maronite, Protestant and others in Syria, Lebanon, Iraq, Iran, Libya and elsewhere, it is the responsibility of all Christians to be their brethren’s keepers. This is most of all a matter of love and basic human compassion. The ecumenical implications are not so much about any political solidarity, but about spiritual solidarity and shared humanity. The urgency is upon us and it is among the principle concerns that we shall discuss with His Holiness Pope Francis in Jerusalem.

Q: Would you comment on recent events in Ukraine and their impact on the Orthodox Church, both internally and with respect to relations with Ukrainian Catholics? What do the events in Ukraine suggest about the relationship between national identity and Christian unity?

A: The situation in Ukraine is in every beat of our heart. We pray without ceasing for peaceful and nonviolent means to be employed by all parties. We know that there are those who would divide the Ukrainian people along religious lines — Catholic against Orthodox and even Orthodox against Orthodox. Such a sad and cynical strategy will fail, because it underestimates the nobility of Ukraine and her glorious Christian history. The roots of faith go deep in the rich soil of Ukraine, which has brought forth great exemplars of faith. What remains to be seen is how the precious Ukrainian people will align their own destiny with such a wondrous past. How their identity shapes their national consciousness and spiritual values must be allowed to evolve in a positive and peaceful way. Any other solution for Ukraine will destroy the fragile democracy that has barely emerged from the crushing atheistic Soviet era.