Source: RT
The hearts of the followers of the Orthodox Church are aching for the suffering of the people in crisis-hit Ukraine, Patriarch Kirill, head of the Russian Orthodox Church, said in his Easter address.
Natalya Mihailova | 21 April 2014 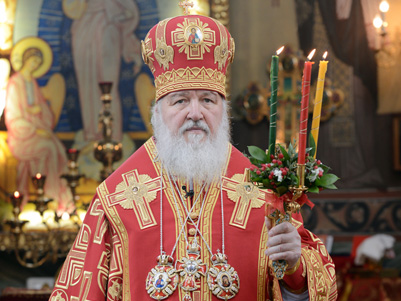 “As we celebrate Easter this year, we pray for the people of Ukraine,” the Patriarch stressed during his speech.

Ukraine remains in a state of turmoil since its democratically elected president was ousted via a coup powered by far-right radicals in February.

“We pray for enemies to reconcile, for violence to stop. We pray that people be merciful to one another no matter what divides them and separates them from each other. All the children of our common Church have Ukraine in their hearts, and our hearts are aching for the suffering of the Ukrainian people,” Russia’s top cleric said.

“That is why these days, together with millions of Orthodox believers, I pray specifically for peace in Ukraine,” he added.

In his address, Patriarch Kirill also reminded the believers that Easter is a holy day, which “celebrates victory over man’s two biggest enemies – sin and death.”

Jesus Christ was the only one who managed to defeat those enemies and “uplifted humanity into divine glory. He abolished everything that prevented us from being like Him,” he said.

“Christ is not only the Judge, but also the Advocate for every sinner, who comes to Him through faith. The primary requirement of the New Testament is that we love one another despite our differences. Lack of love destroys people, divides families, and undermines societies and countries,” the head of the Russian Orthodox Church explained.

Easter is a celebration of the resurrection of Jesus Christ from the dead, described in the New Testament as having occurred three days after his crucifixion at Calvary.

The most important festival of the Oriental Orthodox Church marks the end of the Great Lent, which saw followers fasting for 40 days.

In 2014, Orthodox and Catholic Christians celebrate Easter on the same day.