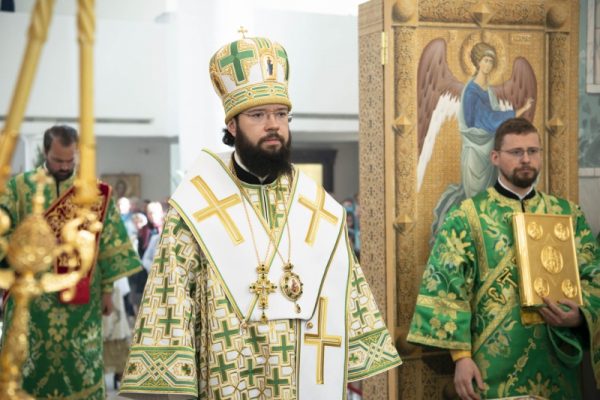 On 16 June 2019, the Day of the Holy Trinity, celebrations took place at the Cathedral of the Holy Trinity on the Branly Embankment in Paris. Metropolitan Antony of Korsun and Western Europe officiated at the Divine Liturgy, the first for him as for the ruling bishop. The Holy Synod of the Russian Orthodox Church appointed him Patriarchal Exarch of Western Europe on May 30.

The festive divine service was celebrated in the Church Slavonic and French languages. The liturgical hymns were sung by the choir of the cathedral conducted by Ms Politova.

After the Prayer before the Ambo, Metropolitan Antony, clerics and laypersons went out on the Procession of the Cross and celebrated Vespers with kneeling prayers.

The Patriarchal Exarch of Western Europe addressed the worshippers. He congratulated them with the patronal feast and dwelt on the meaning of Pentecost.

Festive repast followed during which Metropolitan Antony talked with the parishioners and guests.

That same day he met with clerics of the Cathedral of the Trinity and staff of the diocesan administration. The archpastor was introduces to the work of the diocesan u its and the new projects pertaining to the diocesan life. All participants in the meeting were given the floor and asked questions.

Metropolitan Antony met with H.E. Aleksey Meshkov, Ambassador Extraordinary and Plenipotentiary of the Russian Federation to the French Republic. They were joined in the meeting by Rev. Maxim Politov, secretary of the diocesan administration of the Korsun diocese. Discussed during the talk, which was held in the atmosphere of mutual understanding, were prospects of various fields of cooperation between the diocese and the Russian diplomatic mission.