People Line up in Khabarovsk to Venerate the Myrrh-Streaming Icon of St. Innocent of Alaska and Moscow

Source: Pravmir.ru
Residents of Khabarovsk of all ages lined up before the Orthodox seminary of the Far East capital city.
Natalya Mihailova | 26 August 2014 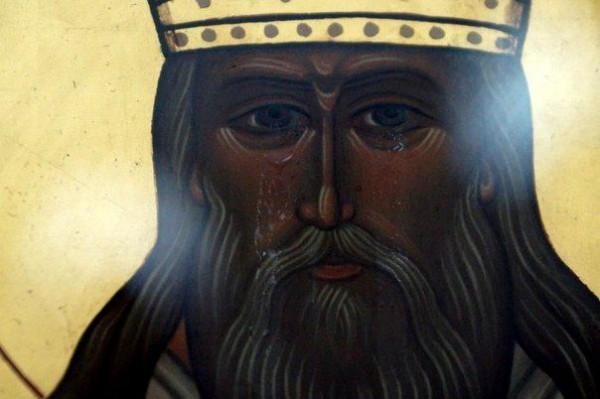 PRAVMIR. In Khabarovsk, on Glory Square, a long line of people waited to venerate the icon of St. Innocent of Alaska and Moscow that has recently become myrrh-streaming. Adults and children are waiting to behold the “weeping” face, relates the news agency EA AmurMedia.

It should be noted that, during a meeting of the Academic Council of the Khabarovsk Orthodox Theological Seminary, chaired by Metropolitan Ignatius of Khabarovsk and Priamursk, one of the seminarians saw that the icon was streaming myrrh.

“The myrrh was first seen by our entrants, who were gathered for evening prayers. When we were told about this, we saw drops on the eyes of St. Innocent of Moscow and smudges from them. This is the icon of our heavenly patron, so we immediately served a moleben [supplicatory service],” related Bishop Ephraim of Bikin, the first vice-rector of the Khabarovsk Theological Seminary. “When the icon was opened in order to verify that myrrh was streaming, the church was filled with a pleasant fragrance. To document the fact that the icon was streaming myrrh, the seminary made a special report.”

The myrrh continued to flow the next day. Large drops, which looked like tears running down the saint’s face, accumulated at the bottom of the icon.

The icon with the saint’s relics was painted at the Holy Trinity-Sergius Lavra and donated to the seminary’s church by the late Patriarch Alexy II.