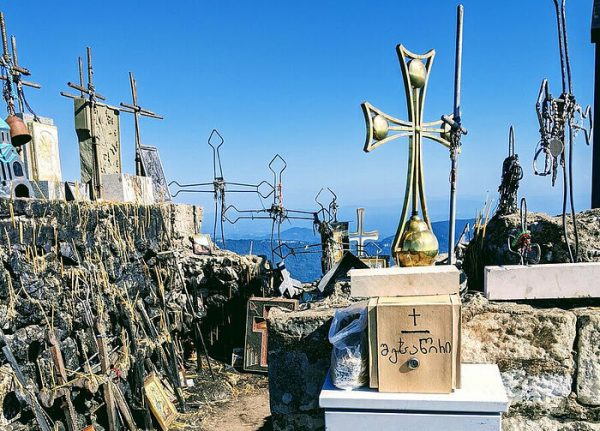 Within the small nation of Orthodox Georgia, there are numerous holy sites that number in the thousands, which have accumulated since the Christianization of Georgia in the fourth century AD. In practically every major mountain or high point, it is common to find a Christian holy site in the form of a church, monastery, or simple prayer site that has been sanctified by centuries of pious pilgrims. With this being said, the sacred holy sites of Georgia were systematically destroyed or neglected during the Soviet period from 1921 to 1991. Because of this, there is still an effort among the Georgian people throughout the nation to restore these holy sites, and one of the most important within the western highland region of Racha is Nine Cross. This is one of the holiest mountains in Georgia and a breathtakingly beautiful natural monument, home to one of the largest surviving boxwood forests in the Caucasus. Two pious stories involve this holy site, with one occurring during the medieval age of Georgia. During that time, a pious couple could not conceive a child and ascended to the peak of Tkibuli mountain to implore our Lord Jesus Christ for a child. Soon thereafter, a child was conceived, and in thanksgiving, the couple said that they would construct a Church at the top of Tkibuli mountain.

This Church was consecrated to the patron saint of the Georgian people, St. George, and would function until the Soviet Union when it was destroyed. However, the memory of the Church was still alive, and during the Great Patriotic War [World War II], nine brothers from the village of Tkibuli were sent to fight in the war. Their father would pray every day on the top of this mountain for the safety of his sons and made a solemn promise to God that he would make a sacrifice to Him if they returned home safely. At the conclusion of this tragic war, all of his sons returned home with no wounds, and in thanksgiving, he erected nine crosses on this mountain. Since the fall of the Soviet Union in 1991, access to this mountain has been limited; it previously entailed a twenty-kilometer (twelve mile) roundtrip hike, which made it difficult for the church on this holy site to be rebuilt. This changed within the past year with the construction of a paved road, which has enabled a significantly larger number of people to visit this holy site. Tragically, however, this resulted in the desecration of the holy site by godless tourists through the throwing of trash or the near killing off of the poor trees that managed to thrive & grow from the barren crevices in the rocks. Nearly every twig and branch of these trees on top of this holy site were covered with cloth, plastic bags, and face masks for the pagan practice of “wishing trees”. Having heard of this tragic situation on Nine Cross, three American Orthodox pilgrims from the English Orthodox community of St. George embarked on a five-hour journey across the nation to clean up this holy site. On the hike up the mountain, these men picked up a fair amount of trash, but upon reaching the peak, there was a pleasant surprise for these foreign pilgrims. Local monastics from the nearby monastery of St. George had seen the deplorable condition of Nine Cross and assigned one monk (Hieromonk Paul) to oversee the cleanup of this holy site. In addition to this, Hieromonk Paul is overseeing the construction of the Church of St. George on Nine Cross, which should be finished within a year through the efforts of the local community and pious Orthodox pilgrims. In their limited time at Nine Cross, these three American Orthodox pilgrims were able to assist Hieromonk Paul in the preparation works for the construction of this Church. Lastly, a deep impression of Pan-Orthodoxy was left upon the Georgian Orthodox pilgrims at Nine Cross, who were pleasantly shocked to see three American Orthodox helping in the construction of one of their most holy sites.