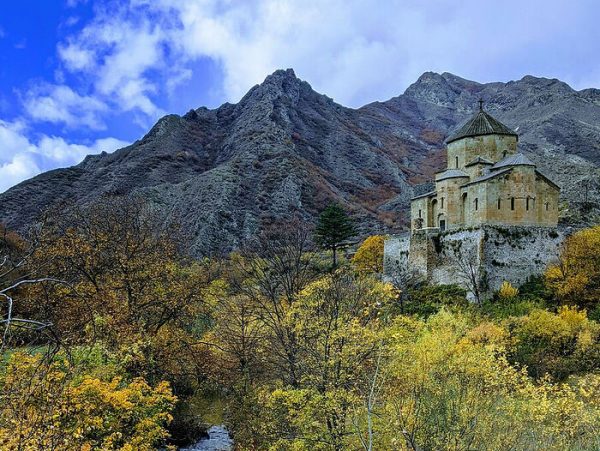 Since the fall of the Soviet Union and the increasing religious, political, and spiritual downfall of much of the Western world in the twenty-first century, there has been a renewed interest in immigration to the post-Soviet Union. This can be mainly attributed to the great spiritual revival that has taken place within the Eastern Orthodox nations of this area, but for the vast majority of these nations, there are immense legal, social, and other barriers that make immigration especially difficult for individuals and families. That being said, there is one oftentimes unknown European Eastern Orthodox nation that is more open and accessible than the rest for Orthodox immigration. This is Orthodox Georgia.

At the present time, the Georgian government has given visa-free access for one full year (365 days) to over 94 nations, which includes every western nation within the English-speaking world. A full list of nations with visa-free access can be seen here. The spiritual situation for an Eastern Orthodox Christian immigrating from the Western world to Orthodox Georgia is one of the best within the Post-Soviet countries, and statistically, more than eighty percent of the Georgian population identify themselves as Orthodox Christians.12 Georgia was the second nation in the world to make Christianity its state religion (330 AD), and the Georgian Orthodox Church is one of the strongest institutions in the nation, with the current Patriarch Ilia II being the most respected man in the nation.3 Since the fifth century the Georgian Orthodox Church has maintained autocephalous status,4 following the Byzantine Liturgical Rite for its services, with the unique and beautiful Georgian Chant being used in the majority of Churches in the nation.5 An example of Georgian Chant and the typical kind of Georgian Church distinct from the Slavic, Greek, and other Orthodox traditions can be seen in this video.6 Currently there are over 2,000 active churches and monasteries in Georgia and over 3,000 clergy and monastics in a nation the size of West Virginia with a population of just three million.7 In addition to this, present within the capital of Tbilisi is a flourishing foreign English-speaking Orthodox community numbering about thirty members, centered at the Church of St. George.8 Members of this community have lived in Georgia for several years collectively, and the admins of the Facebook group/page can provide information for those interested in immigrating to Georgia.

If you would like to help support the continued construction of the Church of St. George to help enable further Orthodox immigration to Georgia, you can donate through the church’s fundraising page. In relation to the everyday Orthodoxy presence within Georgia, cultural Orthodoxy is especially strong within the nation, and the faith itself is looked upon as a normal part of Georgian society. For example, it is common to see Georgian clergy walking on the streets even in the nation’s capital, for faithful to cross themselves whenever passing a holy site, and to see an active Church or monastery in every neighborhood. New Churches are being constructed throughout the nation, and there has been an impressive Georgian Orthodox missionary effort in the western region of Adjara. While the region’s population was predominantly Muslim at the time of the Soviet Union’s collapse because of the forced conversion of the Georgian population during the Ottoman occupation, more recent figures indicate that Adjara’s confessional makeup is approximately sixty-five percent Christian and thirty percent Muslim.9,10

Additionally, Georgians are usually pleasantly surprised and happy upon encountering an Orthodox Christian from the West as it is commonly assumed that there are no Orthodox Christians within the Western world. Polls of the National Democratic Institute (NDI) demonstrate further the depth of Orthodoxy within Georgia. To the question, “How important is your religious belief in making daily decisions,” the majority of Georgians responded very important (36%) and important (48%). In addition, more than thirty-five percent of all Georgians attend church almost on a daily/weekly basis, apart from special occasions.11 This has also been demonstrated by the pro-family events like Family Purity Day and the strong anti-LGBT stances that average Georgians have demonstrated on multiple occasions.12,13 Overall, this makes Georgia an excellent choice on a spiritual level for individuals or families from the western world who wish to live within an Orthodox environment.

This ends part one of a series of articles that will detail how an individual or family can immigrate to Orthodox Georgia, and the next part of this series will cover more practical concerns for immigrating to Georgia, such as cost of living, education, medical care, and other topics.

4 This status was temporarily interrupted when Georgia became a part of the Russian Empire.—Ed.