Pope Francis’ Thoughts on Pastoring in the 21st Century 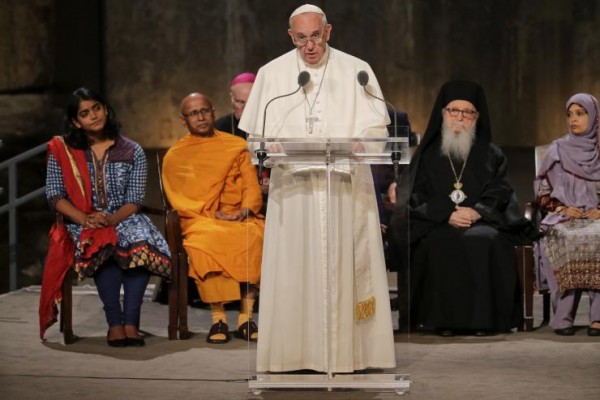 On September 25, 2015, His Beatitude, Metropolitan Tikhon and I attended the multi-religious gathering with Pope Francis at the Museum of the National 9/11 Memorial at in lower Manhattan.  Representatives of most of the Eastern and Oriental Orthodox Churches were present.  The gathering had been organized only a few weeks earlier, which under normal circumstances—for people with chock-full schedules booked a year in advance—would be impossible.  But, as one of the Orthodox bishops in attendance remarked, “We have trouble getting together as Orthodox, but when the Pope calls we drop everything and go!”

Pope Francis is the single most visible Christian leader in the world.  Roman Catholicism has 1.2 billion followers world-wide, and a third of the US population identifies as such.  So it’s not surprising that there was an avalanche of news coverage on his recent visit.  Still, I found it instructive and inspiring that in this supposedly secular country, so much attention was lavished on Pope Francis by gushing journalists.

Much has been written about “the Francis effect,” his historic speech to Congress, his appearance at the United Nations and the 9/11 Memorial and other major events.  But in reflecting on his visit, it is his words to bishops, clergy and religious at two underreported stops that most struck a chord with me.  The first was the Vesper service at New York’s Saint Patrick’s Cathedral.  The second was his meeting with Catholic bishops in Philadelphia.  At these smaller gatherings with “church professionals,” his message about the aims and temptations of “apostolic work” in the 21st century deserve attention from Orthodox Christians, even as we express concern about “expanding our mission” and caring for people being shaped by unprecedented social changes.  Here is a distillation of his main points, in his words.

2. Hard work.  A grateful heart is spontaneously impelled to serve the Lord and to find expression in a life of commitment to our work.  Once we come to realize how much God has given us, a life of self-sacrifice, of working for Him and for others, becomes a privileged way of responding to His great love.  Yet, if we are honest, we know how easily this spirit of generous self-sacrifice can be dampened.  There are a couple of ways that this can happen; both are examples of that “spiritual worldliness” which weakens our commitment to serve and diminishes the wonder of our first encounter with Christ.

3. Measure by the Cross, not by efficiency, good management and outward success.  We can get caught up measuring the value of our apostolic works by the standards of efficiency, good management and outward success which govern the business world—not that these things are unimportant!  We have been entrusted with a great responsibility, and God’s people rightly expect accountability from us.  But the true worth of our apostolate is measured by the value it has in God’s eyes.  To see and evaluate things from God’s perspective calls for constant conversion in the first days and years of our vocation and, need I say, great humility.  The cross shows us a different way of measuring success.  Ours is to plant the seeds; God sees to the fruits of our labors.  And if at times our efforts and works seem to fail and produce no fruit, we need to remember that we are followers of Jesus… and that His life, humanly speaking, ended in failure, the failure of the Cross.

4. Rest with the poor and don’t be jealous of your free time.  Another danger comes when we become jealous of our free time, when we think that surrounding ourselves with worldly comforts will help us serve better.  The problem with this reasoning is that it can blunt the power of God’s daily call to conversion, to encounter with Him.  Slowly but surely, it diminishes our spirit of sacrifice, renunciation and hard work.  It also alienates people who suffer material poverty and are forced to make greater sacrifices than ourselves.  Rest is needed, as are moments of leisure and self-enrichment, but we need to learn how to rest in a way that deepens our desire to serve with generosity.  Closeness to the poor, the refugee, the immigrants, the sick, the exploited, the elderly living alone, prisoners and all God’s other poor will teach us a different way of resting, one which is more Christian and generous.

5.  Be shepherds to all in times of unprecedented change.  Should we blame our young people for having grown up in this kind of society?  Should we condemn them for living in this kind of a world?  Should they hear their pastors saying that “it was all better back then,” “the world is falling apart and if things go on this way, who knows where we will end up?”  No, I do not think that this is the way.  As shepherds following in the footsteps of the Good Shepherd, we are asked to seek out, to accompany, to lift up, to bind up the wounds of our time.  To look at things realistically, with the eyes of one who feels called to action, to pastoral conversion.  The world today demands this conversion on our part.  “It is vitally important for the Church today to go forth and preach the Gospel to all—in all places, on all occasions, without hesitation, reluctance or fear.  The joy of the Gospel is for all people: no one can be excluded” [Evangelii Gaudium, 23].

6. Holy boldness.  We need to invest our energies not so much in rehearsing the problems of the world around us and the merits of Christianity, but in extending a sincere invitation to young people to be brave and to opt for marriage and the family.  Here too, we need a bit of holy parrhesia [boldness]!  A Christianity which “does” little in practice, while incessantly “explaining” its teachings, is dangerously unbalanced.  I would even say that it is stuck in a vicious circle….  A pastor serenely yet passionately proclaims the word of God.  He encourages believers to aim high.

7. More shepherding, less talking.  A pastor watches over the dreams, the lives and the growth of his flock.  This “watchfulness” is not the result of talking, but of shepherding.  Only one capable of standing “in the midst of” the flock can be watchful, not someone who is afraid of questions, contact, accompaniment.  A pastor keeps watch first and foremost with prayer, supporting the faith of his people and instilling confidence in the Lord, in his presence.  A pastor remains vigilant by helping people to lift their gaze at times of discouragement, frustration and failure.  We might well ask whether in our pastoral ministry we are ready to “waste” time with families, whether we are ready to be present to them, sharing their difficulties and joys.

8. Sowing seeds in crooked furrows.  If we prove capable of the demanding task of reflecting God’s love, cultivating infinite patience and serenity as we strive to sow its seeds in the frequently crooked furrows in which we are called to plant, then even a Samaritan woman with five “non-husbands” will discover that she is capable of giving witness.  And for every rich young man who with sadness feels that he has to calmly keep considering the matter, an older publican will come down from the tree and give fourfold to the poor, to whom, before that moment, he had never even given a thought. 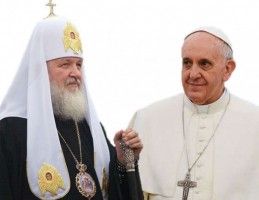 “The issue of the persecution of Christians will be central in this meeting,” the metropolitan said.…

The story goes that Teresa of Avila (1515-1582), the great Roman Catholic saint, was complaining to God after once again…