Patriarch Kirill, Pope Francis to meet on Cuba on February 12

Source: Interfax-religion
Natalya Mihailova | 06 February 2016
Moscow, February 5, Interfax - - Patriarch Kirill of Moscow and All Russia will meet with Pope Francis on Cuba on February 12, Metropolitan Hilarion of Volokolamsk, the head of the Synodal Department for External Church Relations, told a press conference in Moscow on Friday. 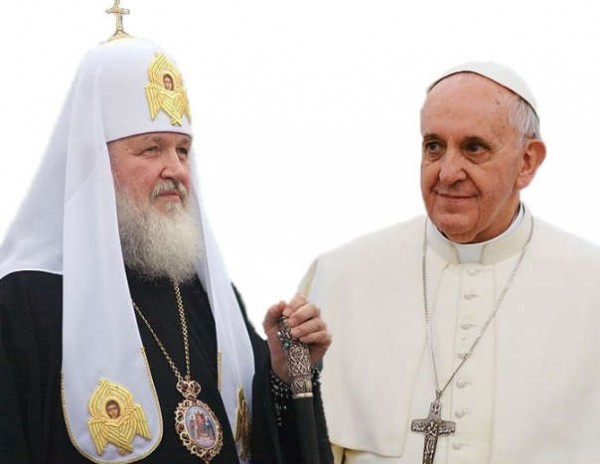 “The issue of the persecution of Christians will be central in this meeting,” the metropolitan said.

He said the patriarch and the pope will discuss issues relating to bilateral relations and international policy. The meeting will comprise a meeting in person at the international airport in Havana and will lead to the signing of a joint declaration.

“This meeting will become the first meeting in history and it will mark an important stage in the relations between the two Churches. The Moscow patriarchate and the Holy See want this meeting to become a sign of hope to all people of good will and it causes Christians to pray much for the upcoming meeting to yield good results,” the hierarch said.

Metropolitan Hilarion said the problem of the actions taken by Greek Catholics (Uniates) in Ukraine has not been resolved in the relations between the two Churches, specifically, “the destruction by the Uniates of three dioceses of the Moscow patriarchate in Western Ukraine, the transfer of the center of the Ukrainian Greek Catholic Church from Lviv to Kyiv, the persistent desire of this Church to give itself the status of patriarchate, the spread of the Ukrainian Greek Catholic Church to the traditional lands of Eastern and Southern Ukraine, and the support of schismatics by the Uniates.”

“The situation that now develops in the Middle East, in Northern and Central Africa and in some other regions, where extremists are carrying out true genocide of Christian population, requires urgent measures and even closer interaction between the Christian churches,” he said.

“In this tragic situation, there is a need to set disagreements aside and unite efforts to save Christianity in these regions where it is being subjected to the toughest persecution,” he said.

The metropolitan said it was stated from the very beginning that the meeting should take place on neutral territory, and that the patriarch did not want the meeting with the pontiff to take place in Europe “because the difficult history of division and conflicts between Christians is associated with Europe.”

The fact that the patriarch is visiting the countries of Latin America at the same time when the pope is visiting Mexico provided an opportunity “to hold a meeting in the New World, which we hope will turn over a new page in the relations between the Churches,” the metropolitan said.