Prayer Meeting for Peace in the Middle East – Bari, Italy 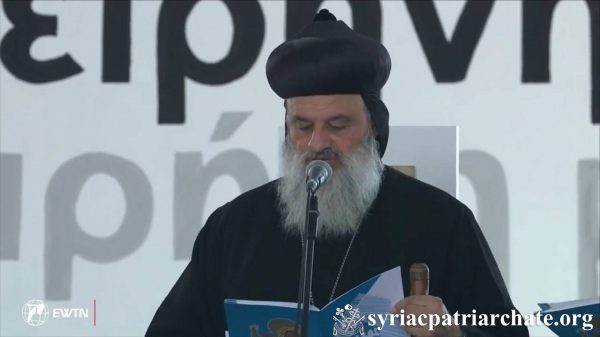 On July 7th 2018, His Holiness Patriarch Mor Ignatius Aphrem II participated in the Prayer Meeting hosted by His Holiness Pope Francis in the city of Bari – Italy, along with the Heads of Middle Eastern Churches.

Their Holinesses and Beatitudes Patriarchs of the Orthodox and Catholic Churches of Constantinople, Alexandria, Antioch and Jerusalem, also participated in the prayer.
His Holiness Pope Francis greeted their Holinesses and Beatitudes outside the Basilica of St. Nicholas and together they descended to the crypt to pray before the relics and light a flame for peace symbolizing the unity of Christians. They then moved to the Esplanade where a place was prepared for the prayer to take place.

In his Introductory Address at the Prayer Meeting, His Holiness Pope Francis considered that “we are carrying in our hearts our Churches, our peoples and all those living in situations of great suffering. We are saying to them, ‘We are close to you’”. He considered that from the Middle East “the light of faith spread throughout the world.” He noted that “There is also the danger that the presence of our brothers and sisters in the faith will disappear, disfiguring the very face of the region. For a Middle East without Christians would not be the Middle East.”

His Holiness Pope Francis concluded: “Indifference kills; and we desire to lift up our voices in opposition to this murderous indifference. We want to give a voice to those who have none, to those who can only wipe away their tears. For the Middle East today is weeping, suffering and silent as others trample upon those lands in search of power or riches.”

After that, the Prayer Meeting was held. All heads of Churches gathering in Bari raised the prayer together for peace. His Holiness Patriarch Mor Ignatius Aphrem II prayed in Syriac and English the following prayer:

“Blessed be Jesus Christ, our Lord, the Only–Begotten of the Father, announced by the prophets as Prince of Peace, born of a woman in Bethlehem of Judea: by his blood he reconciled Abel and Cain, he knocked down the dividing wall and he made the two peoples one; risen from the dead, as his first gift to his disciples, he gave peace. The same peace we ask for his two servants the kidnapped archbishops of Aleppo Boulos Yaziji and Mor Gregorius Youhanna Ibrahim together with the kidnapped priests that they may return to us safe.”

At the end of the prayer, their Holinesses and Beatitudes lit candles for peace.

His Holiness our Patriarch was accompanied by His Eminence Mor Timotheos Matta Al-Khoury, Patriarchal Vicar in the Patriarchal Archdiocese of Damascus, and Very Rev. Raban Joseph Bali, Patriarchal Secretary and Media Office Director. 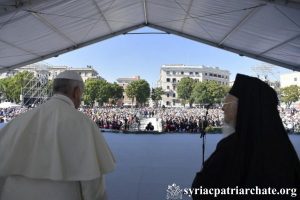 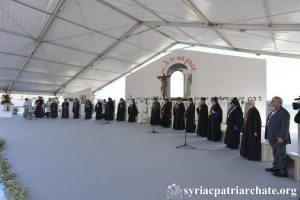