People who daily “read through” the morning and evening prayers constantly have the temptations of reading the “rule” as quickly as possible in order to get on with the business of the day.
Metropolitan Hilarion (Alfeyev) | 17 May 2014
We continue a new series on prayer, transcribed from television episodes presented on Russian television in the spring of 1999 by Fr. (now Metropolitan) Hilarion (Alfeyev) with the blessing of His Holiness, the late Patriarch Alexy II of Moscow and All Russia. We hope to present three sections a week, each of which is relatively brief but substantial, for a total of thirty-two episodes. 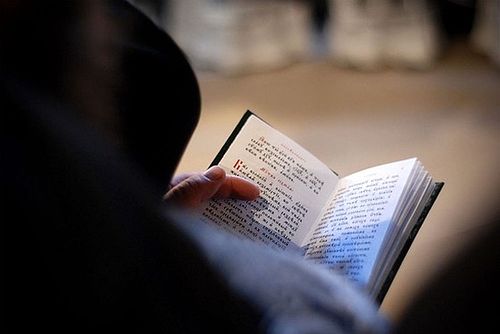 One can pray in different ways, in one’s own words for example. Such prayer should constantly accompany one. Morning and evening, day and night, one can turn to God with simple words coming from the depths of one’s heart.

But there are also prayers that were compiled by the saints in antiquity, which need to be read in order to learn how to pray. These prayers are contained in the “Orthodox Prayer Book.” There you will find prayers for the morning and evening, for repentance and thanksgiving, along with various canons, akathists, and much else. When you purchase an “Orthodox Prayer Book,” do not be alarmed that there are so many prayers. You do not have to read all of them.

If the morning prayers are read quickly, this takes about twenty minutes. But if one reads them thoughtfully and carefully, responding in one’s heart to each word, then reading them can take a whole hour. Therefore, if you do not have time, do not try to read all the morning prayers; it is better to read one or two, but in such a way that every word reaches your heart.

Before the section with the “Morning Prayers,” it says: “Having risen from sleep, before any other action, stand reverently, considering thyself to be in the presence of the All-seeing God, and, having made the sign of the Cross, say: ‘In the Name of the Father, and of the Son, and of the Holy Spirit. Amen.’ Then pause a moment, until all thy senses are calmed and thy thoughts forsake all things earthly.” This pause, this “moment of silence,” before beginning to pray is very important. Prayer should grow out of the quietness of our hearts. People who daily “read through” the morning and evening prayers constantly have the temptations of reading the “rule” as quickly as possible in order to get on with the business of the day. Often, with such reading, the most important thing – the content of the prayers – is eluded.

In the Prayer Book there are many petitions addressed to God that are repeated many times. For example, you can come across the recommendation to repeat “Lord, have mercy” twelve or forty times. Some people see this as some kind of formality and read this prayer as quickly as possible. By the way, in Greek “Lord, have mercy” is “Kyrie, eleison.” In Russian there is the verb kurolesit’ [to play tricks], which came from the fact that readers on the choir often quickly or repeatedly read “Kyrie, eleison” – that is, they were not praying, but were playing. Thus, in prayer one does not need to play tricks [kurolesit’]. No matter how many times this prayer is read, it should be spoken with care, reverence, and love, with full delivery.

One does not need to try to read through all the prayers. It is better to dedicate twenty minutes to the single prayer “Our Father,” repeating it several times, pondering every word. It is not easy for someone who is not accustomed to prayer immediately to read through a large number of prayers – and this is not something to which one should aspire. It is important to become imbued with the spirit that is breathed by the prayers of the Church Fathers. This is the main benefit to be derived from the prayers contained in the “Orthodox Prayer Book.”