It seems to me that, for someone living in the world, not only fifteen but even five minutes of morning and evening prayer can be enough to be a true Christian – as long, of course, as they are said with attention and feeling. It is important only that one’s thoughts always correspond to the words, that one’s heart respond to the words of the prayers, and that one’s whole life correspond to prayer.
Metropolitan Hilarion (Alfeyev) | 21 May 2014
We continue a new series on prayer, transcribed from television episodes presented on Russian television in the spring of 1999 by Fr. (now Metropolitan) Hilarion (Alfeyev) with the blessing of His Holiness, the late Patriarch Alexy II of Moscow and All Russia. We hope to present three sections a week, each of which is relatively brief but substantial, for a total of thirty-two episodes. 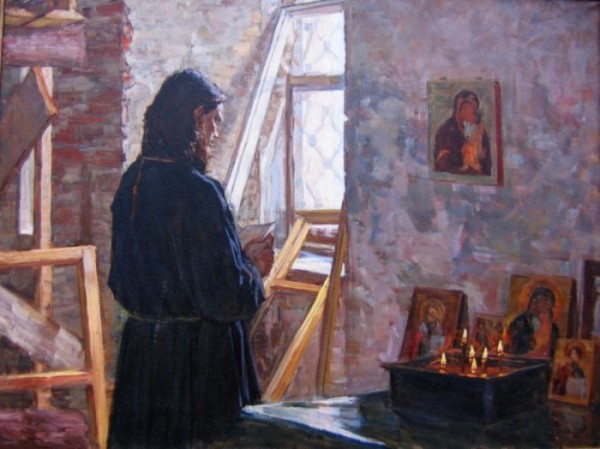 What is a prayer rule? These are prayers that one reads regularly, daily. Everyone has a different prayer rule. For one person, the morning or evening prayers take up several hours, while for another they take a few minutes. Everything depends on one’s spiritual disposition, on the degree of one’s rootedness in prayer, and on how much time one has.

It is very important that one keep a prayer rule, even a very short one, so that one would be regular and constant in prayer. But the rule should not turn into a formality. The experience of many believers shows that, by constantly reading through the same prayers, their words can become colorless: they loose their freshness and one who has gotten used to them can no longer focus on them. This danger needs to be avoided at all costs.

I remember that when I received the monastic tonsure (I was then twenty years old), I turned for advice to an experienced spiritual father, asking him what sort of prayer rule I should have. He said: “You should daily read through the morning and evening prayers, three canons, and one akathist. Whatever happens, even if you are very tired, you are obliged to read them. And even if you read through them quickly and inattentively, that is not important. The main thing is that the rule be read through.” I tried. It did not take. The daily reading of the same prayers led to these texts quickly becoming boring. Besides, I spent many hours daily in church at services that spiritual nourished, fed, and inspired me. But reading through these three canons and an akathist turned into some unnecessary kind of “appendage.” I began to seek out different advice, more suitable to me. And I found it in the works of St. Theophan the Recluse, that remarkable nineteenth-century ascetic struggler. He advised calculating one’s prayer rule not from the number of prayers, but from the time that we are prepared to dedicate to God. For example, we can take as a rule to pray in the morning and evening for half an hour, but these half hours should be wholly given over to God. And it is less important whether we read all the prayers or only one during these minutes, or if we dedicate an evening entirely to reading the Psalter, the Gospel, or to praying in our own words. The most important thing is to be focused on God, that our attention not run away, and that every word reach our heart. This advice worked for me. However, I do not exclude that for others the advice I obtained from my spiritual father might be more appropriate. Here a great deal depends on one’s personality.

Following the advice of St. Theophan the Recluse, try to set aside some time for prayer in the course of the day and for the fulfillment of a daily prayer rule. And you will see that this will quickly bear fruit.