Common prayer strengthens the family, because family life can only be truly full and happy when its members are joined not only by family ties, but also by spiritual kinship and a common understanding and outlook. Common prayer, moreover, has beneficial effects on every member of the family, and is particularly helpful for children.
Metropolitan Hilarion (Alfeyev) | 12 June 2014
We continue a series on prayer, transcribed from television episodes presented on Russian television in the spring of 1999 by Fr. (now Metropolitan) Hilarion (Alfeyev) with the blessing of His Holiness, the late Patriarch Alexy II of Moscow and All Russia. We hope to present three sections a week, each of which is relatively brief but substantial, for a total of thirty-two episodes. 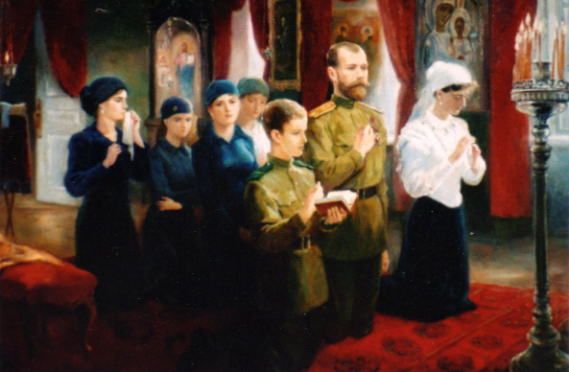 Until now we have spoken primarily about personal, individual prayer. Now I would like to say a few words about prayer in the family circle.

The majority of our contemporaries live in such a way that family members gather fairly rarely, at best twice a day: in the morning for breakfast and in the evening for dinner. During the day, parents are at work, children at school, and only preschoolers and pensioners remain at home. It is very important that, in the daily routine, there be some moments when everyone can gather together for prayer. If a family gathers for dinner, then why not pray for a few minutes together beforehand? One can also read prayers and a selection from the Gospel afterwards.

Common prayer strengthens the family, because family life can only be truly full and happy when its members are joined not only by family ties, but also by spiritual kinship and a common understanding and outlook. Common prayer, moreover, has beneficial effects on every member of the family, and is particularly helpful for children.

In Soviet times it was forbidden to raise children in a religious spirit. This was motivated by the fact that children were to grow up first, and only later to make an independent choice about whether to go the religious way. There was a deep lie within this argument, because before one can have the opportunity to choose, one must have learned something. And the best age for learning is, of course, childhood. It is very difficult for someone who has learned to live without prayer from childhood to learn to pray. Someone who has been raised from childhood in a prayerful, blessed spirit, who from his earliest years knows about the existence of God and how one can always turn to God, even if he later departs from the Church, will still preserve somewhere in the deep recesses of his soul the skills of prayer and the religious charge obtained in childhood. It often happens that people who have departed from the Church return to God at some stage in their life because in childhood they had become accustomed to prayer.

There is another point. Today in many families there are relatives of the older generation, grandmothers and grandfathers, who were raised in a non-religious environment. Even twenty or thirty years ago one could say that the Church was a place for “grandmas.” Now it is grandmothers who represent the very most irreligious generation, having been brought up in the thirties and forties, in the era of “militant atheism.” It is very important that older people find their way to church. It is not too late for anyone to turn to God, but those young people who already know this path should tactfully, gradually, but consistently engage their older relatives in the orbit of the spiritual life. Through daily family prayer one can do this particularly well.

Most viewed articles
Maronite Patriarch Thanks Russian Patriarch for His Support for Christians in the Middle East104
Athens and Jerusalem: the Role of Philosophy in Faith, with Analysis by St. Gregory Palamas83
Food for the Journey82
The pandemic is a significant examination for us all, Transylvania Metropolitan says67
Fire Destroys Main Building with the Church of St. Peter Convent in Pavlodar63
Orthodox Priest Rescues Two People from Fire in Constanța54
We Are Not Saint Mary of Egypt (But We Can Still Repent)36
Most popular authors
Pravmir.com team167
Aurelian Iftimiu121
Eric Hyde83
Dcn. Michael Schlaack82
Archpriest Geoffrey Korz36