On Prayer XIX: The Jesus Prayer

The name is a symbol of its bearer; in the name is present, as it were, the person to whom it belongs. When a young man falls in love with a young woman, he ceaselessly repeats her name, because she is, as it were, present in her name. And inasmuch as love fills his whole being, he feels the need to repeat this name over and over again. In just the same way, a Christian who loves the Lord repeats the name of Jesus Christ, because his whole heart and being are drawn to Christ.
Metropolitan Hilarion (Alfeyev) | 23 June 2014
We continue a series on prayer, transcribed from television episodes presented on Russian television in the spring of 1999 by Fr. (now Metropolitan) Hilarion (Alfeyev) with the blessing of His Holiness, the late Patriarch Alexy II of Moscow and All Russia. We hope to present three sections a week, each of which is relatively brief but substantial, for a total of thirty-two episodes. 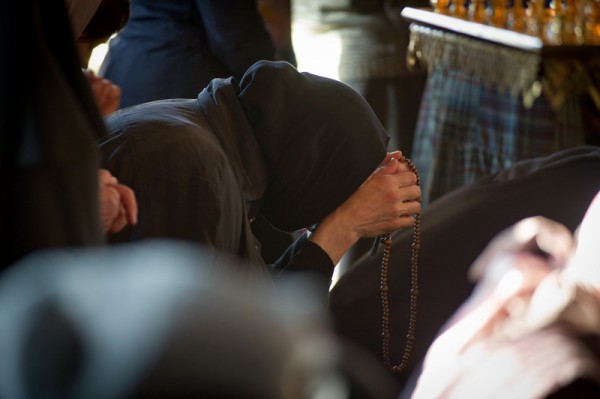 The Apostle Paul says: Pray without ceasing (1 Thessalonians 5:17). People often ask: How can we pray without ceasing, if we are working, reading, speaking, eating, sleeping, etc.? That is, if we are doing things that would seem to be incompatible with prayer? The answer to this question in the Orthodox tradition is the Jesus Prayer. The faithful who practice the Jesus Prayer attain to constant prayer, that is, to a ceaseless standing before God. How is this done?

The Jesus Prayer is: “Lord Jesus Christ, Son of God, have mercy on me, a sinner.” There is also a shorter form: “Lord Jesus Christ, have mercy on me.” But one can also reduce the prayer to three words: “Lord, have mercy.” One who practices the Jesus Prayer repeats it not only during the divine services or when praying at home, but when travelling, eating, and going to sleep. Even if one is talking without someone or listening to someone then, without losing the intensity of his perception, he can nevertheless continue to repeat this prayer in the depths of his heart.

The meaning of the Jesus Prayer does not of course consist in its mechanical repetition, but in always feeling the living presence of Christ. This presence is felt by us first us all because, by pronouncing the Jesus Prayer, we pronounce the name of the Savior.

The name is a symbol of its bearer; in the name is present, as it were, the person to whom it belongs. When a young man falls in love with a young woman, he ceaselessly repeats her name, because she is, as it were, present in her name. And inasmuch as love fills his whole being, he feels the need to repeat this name over and over again. In just the same way, a Christian who loves the Lord repeats the name of Jesus Christ, because his whole heart and being are drawn to Christ.

It is very important when performing the Jesus Prayer not to try to imagine Christ, depicting Him like someone in some life situation or, for example, hanging on the Cross. The Jesus Prayer should not be paired with images that might arise in our imagination, because then there is a substitution of real imagination. The Jesus Prayer should be accompanied only by an inner sense of Christ’s presence and a feeling of standing before the Living God. No external images are appropriate here.