On Prayer XVII: On Compunction and Tears

If a grace-filled state does not come to us and we are not overcome by compunction, we should not worry. This means that our soul is not ripe for compunction. But minutes of such enlightenment are a sign that our prayer is not barren. They testify to the fact that God responds to our prayers and that the grace of God touches our hearts.
Metropolitan Hilarion (Alfeyev) | 18 June 2014
We continue a series on prayer, transcribed from television episodes presented on Russian television in the spring of 1999 by Fr. (now Metropolitan) Hilarion (Alfeyev) with the blessing of His Holiness, the late Patriarch Alexy II of Moscow and All Russia. We hope to present three sections a week, each of which is relatively brief but substantial, for a total of thirty-two episodes. 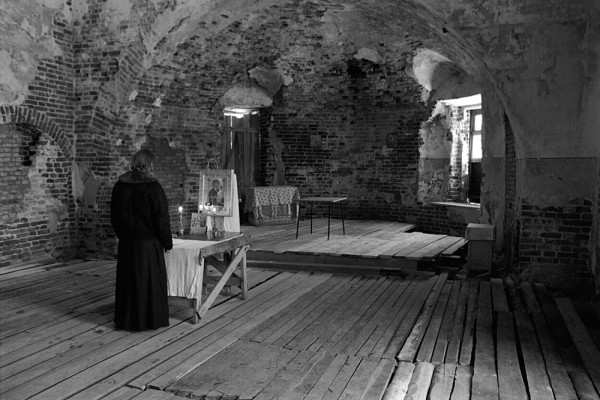 I would like to say a few words about the spiritual and emotional condition that people experience in prayer. Let us recall the well-known verses of Lermontov:

In a trying minute of life

If sadness o’erfills the heart,

By rote, without cease I recite.

There is a beneficent will

In the music of living words,

And there breathes in them

And the soul will release its burden,

Doubt is far away

And it’s easy to trust, and to cry,

And I feel so light, so light…

In these beautiful, simple words of the great poet is described what happens to many people during prayer. One recites the words of prayer, perhaps familiar to one from childhood, and suddenly one feels a kind of enlightenment, lightening, and tears. In church language this condition is called compunction. It is a condition that is sometimes given one during prayer, when one feels the presence of God more than usual. It is a spiritual state, when the grace of God touches the heart directly.

Recall the passage from Ivan Bunin’s autobiographical book, The Life of Arsenyev, in which Bunin describes his teenage years and how, while still a schoolboy, he attended divine services in the parish church of the Lord’s Elevation. He describes the beginning of the All-Night Vigil, in the shadows of the church, where there are very few people:

“How it all moves me! I am still a boy, an adolescent, but then, I was born endowed with the sense of all this, and during the past years I have so many times passed through that expectation, that tense silence preceding the service, so many times heard those exclamations and the ‘amen’ that unfailingly follows them and drowns them out, divining beforehand every word of the service, now gives a double response to everything, intensified by its expectation. ‘Glory to the Holy and Consubstantial…’ I hear the pleasant familiar voice coming faintly from the altar, and for the rest of the service I stand as if bewitched. ‘O come, let us worship God our King! O Come let us worship…’ ‘Bless the Lord, o my soul,’ I hear, while the priest, preceded by the deacon with a taper, quietly walks about the church, silently filling it with whiffs of the fragrance of incense, and bowing to the icons; and tears dim my eyes, for already I know with certainty that there is, and can be, nothing more beautiful or loftier on earth than all this. And on and on flows the holy mystery. The Tsar’s Gate is closed and opened alternately, symbolizing now our ejection from the paradise lost by us, now the new contemplation thereof; wonderful light-prayers are recited, giving vent to our sorrowful awareness of our earthly weakness, our helplessness, and our eagerness to be led along the path of God.” And Bunin writes that he was able to visit many Western churches where there were organs, that he went into Gothic cathedrals, but he “never wept in those cathedrals as I did in the tiny church of the Elevation of the Cross on those dark lonely evenings.”

It’s not just great poets and writers that can describe the grace-filled effects that visiting a church is necessarily bound up with. Everyone can experience it. It is very important that our soul be open to such feelings, so that, coming into church, we be ready to receive the grace of God to the extent to which it is given to us. If a grace-filled state does not come to us and we are not overcome by compunction, we should not worry. This means that our soul is not ripe for compunction. But minutes of such enlightenment are a sign that our prayer is not barren. They testify to the fact that God responds to our prayers and that the grace of God touches our hearts.