Press Conference in Moscow on Persecution of Christians in Africa 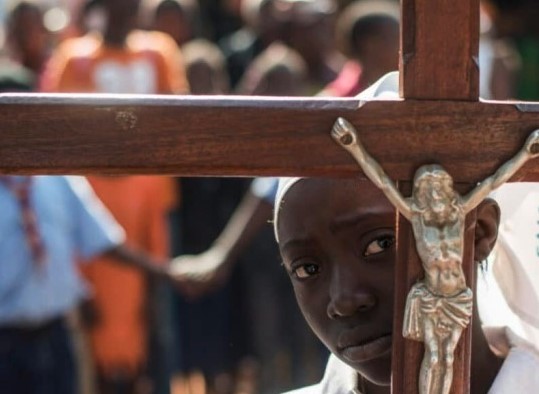 On February 4, 2022, a press conference took place at MIA Russia Today with the online participation of Metropolitan Hilarion of Volokolamsk, Chairman of the Department for External Church Relations of the Moscow Patriarchate, Metropolitan Leonid of Klin, Patriarchal Exarch for Africa, Hieromonk Stephen (Igumnov), DECR secretary for inter-Christian relations and head of the Interreligious Working Group for defending the rights of believers from discrimination and xenophobia under the Presidential Council for Cooperation with Religious Associations.

As Metropolitan Hilarion noted in his introductory remarks, every fifth Christian in African countries is subjected to persecution and each year thousands of African Christians have been deprived of life for their faith in Jesus Christ. “The Russian Orthodox Church considers the opposition to persecution on religious grounds to be one of its primary tasks on the international arena and for many years has given support to persecuted Christians in various regions of the world, including Africa”, the DECR chairman stated.

He recalled that His Holiness Patriarch Kirill of Moscow and All Russia repeatedly urged “not to leave without attention the problems of Christians in African countries”.

Metropolitan Hilarion pointed out that the work of the Moscow Patriarchate “concerns both the informational support of the persecuted Christians and projects for giving them humanitarian aid”. It is the task, in particular, of the International Working Group for defending the rights of believers from discrimination and xenophobia under the Russian Presidential Council for Cooperation with Religious Associations.

“The Moscow Patriarchate has given support to persecuted African Christians, maintaining contacts with Christian Churches of the continent, including its largest ones – the Coptic and Ethiopian Churches”, the hierarch said, “The work with them is carried out by the Russian Orthodox Church as part of the work of the bilateral Commission for Dialogue. Thus, in Ethiopia, the Moscow Patriarchate has given support to local Christians who found themselves in a grave situation as a result of the actions of extremist groups and the development of civic confrontation. In 2019-2020, His Holiness Patriarch Kirill of Moscow and All Russia personally came out in defense of Christians subjected to organized attacks in central and western Ethiopia. “His voice was heard and the country authorities gave attention to this problem”, the DECR chairman said.

His Eminence recalled the tragic situation of the Christian population in several African countries, including the Democratic Republic of the Congo, Uganda, Kenya, Mozambique, the attacks of radicals on Christian villages in Mali, the religious persecutions in Burkina Faso. And in Niger, wh ere Christians compose less than one percent of the population, their situation is especially disturbing, the archpastor noted.

He stated that the gravest situation remains for Christians in Sub-Saharan Africa. The most disastrous situation is in Nigeria, as 79% of all the murders of Christians in Africa accounted on this country in 2021. “The Nigerian authorities are either unaware of or conceal the true scale of the persecution”, he stressed.

The persecution of the Christian population is continuing in Somali as well. Metropolitan Hilarion also pointed to the very grave situation for Christian in Libya wh ere virtually not a single acting Christian church has remained.

“Unfortunately, all this is far from exhausting the list of countries in which atrocities against Christians are committed”, the DECR chairman said, “This list shows the scale of the disaster. The Russian Orthodox Church will continue her efforts to support persecuted Christians in Africa”

Speaking at the press conference, the Patriarchal Exarch for Africa, Metropolitan Leonid of Klin, indicated the priority tasks faced by the Russian Orthodox Church on the African continent today.

Noting that the synodal decision to establish the Patriarchate Exarchate of Africa was made a little over a month ago, His Eminence said that during this time “we have managed to send two missionary groups to the African continent to make a thorough study of many countries on the violation of the rights and freedoms of Christian minorities”.

The archpastor stated that the defence of the Christian population of the African continent is a priority for the Russian Church. “If we do not do it, we simply will not have anybody to communicate with there, as all Christians will be massacred, ousted and this will be the end of the entire Christianity in Africa, while the African continent accounts for neither more nor less than the 1,3 billion population”, the hierarch said.

His Eminence Leonid also noted that the religious, humanitarian and social service is among the most important components of the Russian Orthodox Church’s mission in Africa.

“As of today, we have to protect priests and priests’ children who are persecuted on various grounds, including farfetched ones”, the archpastor mentioned speaking of the communities which have decided to join the Patriarchal Exarchate for Africa, “For the time being, thank God, they are not subjected to physical violence. Nevertheless, their rights are violated everywhere, as people are driven away from their homes, from churches belonging to African communities. We pay attention to it as well by recording all these cases and will report them to His Holiness the Patriarch and to the Holy Synod of the Russian Orthodox Church because all this should not pass unnoticed”.

In the course of the meeting with the press, information about the situation of the Christian population in various countries in Africa was also shared by Hieromonk Stephen (Igumnov), DECR secretary for inter-Christian relations and head of the Working Group for defending the rights of believers from discrimination and xenophobia under the Russian Presidential Council for Cooperation with Religious Associations.

“Speaking about the persecution of Christians, including in Africa, it is very important that the specifics of what we are speaking about should be stressed. The Russian Orthodox Church, in her engagement in the defence of Christians and humanitarian aid has always adhered to this rule”, he said, noting that the information about the situation concerning the rights of believers in Africa comes from both inter-Christian organizations (the information received through public channels being obligatory verified), and from direct contacts with African churches.

Speaking about the situation in particular countries, he made a special mention of Nigeria. “It is a country that needs to be shouted about today”, Father Stephan stressed. He recounted that extremists in this country have systematically attacked Christians in recent years, and the number of killed Christians amounts to thousand yearly: “What is practised are mass attacks on Christian settlements and their full destruction. That is to say, a particular village, a small town, and those who did not have time to escape are killed, their houses, churches and all their property and crops are burnt up”. The reports do not take into account people’s deaths of starvation because of such attacks, deaths in refugee camps – here is not statistics about it at all. This is an enormous work to be carried out, also by the Russian Orthodox Church, in giving aid to Nigerian Christians”. In addition, terrorists of the Boko Haram group (banned in RF – ed.) practise attacks on universities, Christian schools and orphanages.

Although the Democratic Republic of the Congo is a state with a Christian majority, the northeast of this country has become in the recent two or three years an arena for jihadists’ attacks and mass extermination of Christians on Nigeria’s system, on a somewhat smaller scale though.

In Uganda, extremists attack Christian pastors, kidnap them and more often kill them. Besides, they kill former Muslims who have adopted Christianity.

In Kenya, the groups of Al-Shaabab (banned in RF-ed.) carried out their attacks from the territory of Somali. In the east of the country, they use a terrifying tactics: in their attacks on intercity buses, they kill all the passengers who profess Christianity.

In Somali, Christians are in the same situation they are in Libya: there is almost none of them remain there, and those who are there are in deep hiding. Any sign of one’s belonging to Christianity inevitably involves an agonizing death.

The problem extends affecting ever new countries in the continent, Father Stephen stated. A new sign of persecution in various countries is that extremists attack Christian assemblies during processions with the cross and festivities. In many cases, the attacks, kidnappings, etc. affect children.

At the same time, as was noted during the press conference, the world community is mostly keeping silent about the situation of Christian subjected to persecutions and extermination.

The participants in the press conference also answered questions from journalists. In particular, highlighted was the issue of inter-Christian cooperation with the aim to help persecuted Christians in Africa. Metropolitan Leonid also recounted the steps to regulate the life of African Orthodox communities who have joined the Patriarchal Exarchate for Africa.