Source: DECR
Natalya Mihailova | 25 May 2015
On 24 May 2015, after celebrating the Divine Liturgy at the Cathedral of Christ the Saviour, His Holiness Patriarch Kirill of Moscow and All Russia arrived in Red Square to attend a concert marking the Day of Slavic Literature and Culture. 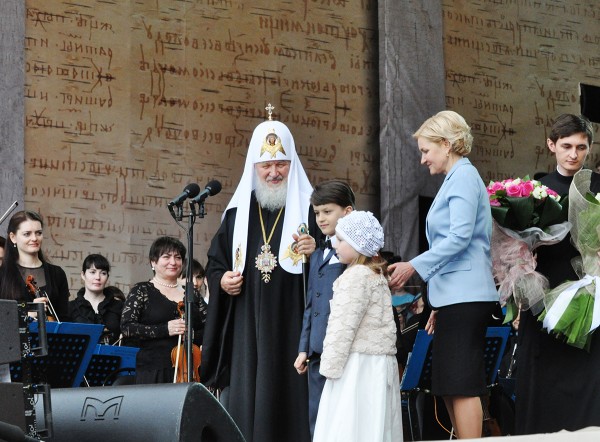 Similar concerts took place in many cities and towns throughout Russia, continuing the tradition established the year before. Celebrations in Moscow were organized by the Russian Orthodox Church, the Ministry of Culture of the Russian Federation, and the Government of Moscow.

Among those performing at the concert were the Central Military Orchestra of the Ministry of Defence of the Russian Federation conducted by the Honoured Artist of Russia, Lieutenant General Valery Khalilov, the Rimsky-Korsakov Central Navy Band of the Russian Federation, the “Rossiya” State Academic Russian Folk Ensemble named after Lyudmila Zykina, the Grand Combined Choir conducted by the Honoured Artist of Russia, Mr. Alexei Puzakov, the Choir of the Sretensky Monastery, as well as popular actors and singers. 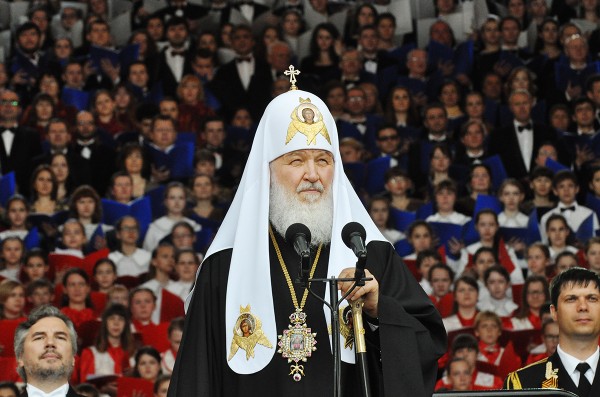 His Holiness Patriarch Kirill greeted all those present in Red Square, saying in particular:

“Today we are glorifying the heroic deed of two remarkable people, two enlighteners, Cyril and Methodius, who brought to the Slavic world an alphabet, literacy, and through that – enlightenment.

“What is the goal of any enlightenment? What is to be enlightened? It is human mind and heart. If mind alone is being educated while heart is straying in the darkness, such man can be inventive and become a talented criminal. If heart alone is being enlightened while mind is darkened, such man finds it hard to fit in the pace of modern life and to realize what is going on around. Unwillingly, he gets alienated from life, what is not always good for him, his family and all people around him.

“Both mind and heart need to be enlightened, as was evidenced by Cyril and Methodius. While mind needs education and science, heart needs to be cleaned of evil, to be in the power of light. 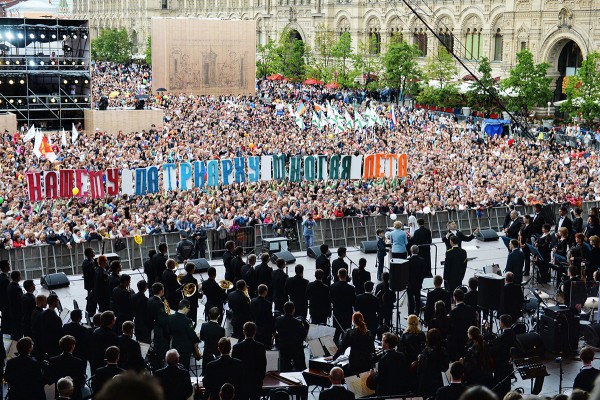 “If our people will be thus enlightened, if the combination of good education, scientific achievements, erudition and spiritual and moral principles will be evident, then the life of our nation will really soon change for the better. Since Russia is a country, influential in the world community, that experience of combining intellectual and spiritual dimensions will help us proclaim our own message to the world.

“Sometimes we are asked what our message to the world is about. It is a combination of knowledge, intellect, education and spirituality. That is the source of national power.

“I cordially greet you with this remarkable feast. May God’s blessing be with all of you, with thousands of people who have gathered in Red Square and with all those numerous people who will be singing together with us today. May God be with you!”