Primate of Orthodox Church in America prays at Donskoy monastery before the relics of his heavenly patron.

Source: DECR
Natalya Mihailova | 06 December 2014
On 4 December 2014, the Feast of the Entrance of the Mother of God into the Temple and the commemoration day of St Tikhon’s enthronement, the delegation of the Orthodox Church in America, led by His Beatitude Tikhon, Archbishop of Washington, Metropolitan of All America and Canada, visited the Donskoy Stavropegic Monastery in Moscow. 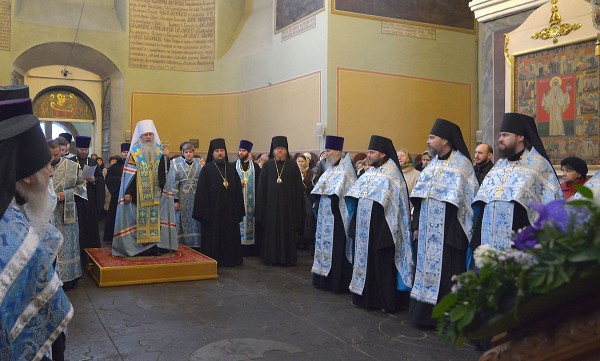 His Beatitude Tikhon was also accompanied by Archimandrite Alexander (Pihach), rector of the Moscow Metochion of the Orthodox Church in America – the Church of the Holy Great Martyr Catherine In-the-Fields; archpriest Igor Yakimchuk, DECR secretary for inter-Orthodox relations; and Mr. Dmitry Petrovsky, a DECR staff member. 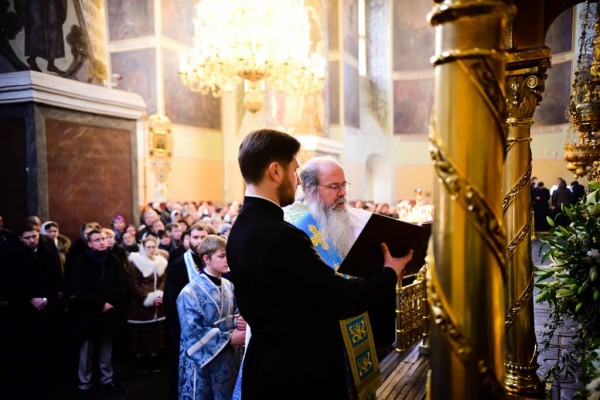 The Primate of the Orthodox Church in America said a thanksgiving before the holy relics of St Tikhon the Patriarch of All Russia. Concelebrating with His Beatitude were Bishop Alexander of Toledo; Bishop Sergy of Solnechnogorsk, head of the Administrative Secretariat of the Moscow Patriarchate; Bishop John of Naro-Fominsk, administrator of the Patriarchal parishes in the USA; Bishop Tikhon of Podolsk, a vicar of the Patriarch of Moscow and All Russia; Hegumen Paramon (Golubka), abbot of the Donskoy Monastery; archpriest Nikolai Balashov, vice-chairman of the Moscow Patriarchate’s Department for External Church Relations; archpriest Vladimir Divakov, secretary of the Patriarch of Moscow and All Russia for the city of Moscow; protodeacon Vladimir Nazarkin, assistant to the DECR chairman; and brethren of the monastery. The prayer service was said in Church Slavonic and English.

The Primate of the Orthodox Church in America venerated the holy relics of his heavenly patron, St Tikhon the Patriarch of Moscow and All Russia.

After the thanksgiving the abbot of the monastery greeted His Beatitude Metropolitan Tikhon of All America and Canada, saying in particular, “By God’s dispensation St Tikhon was destined to govern the Russian Orthodox Church in a hard time. We know that he held firmly in his hands the church helm and strived to follow Christ, reconciling the people of Russia, being a grieving intercessor for our people.”

“We know that St Tikhon also performed his service on the other continent where you continue his labours, harvesting what St Tikhon had sown,” the abbot of the monastery continued, “In this hard time he spiritually unites us, bringing closer together the two continents and their peoples who may have different views, but have common striving after Christ.”

In commemoration of his visit, His Beatitude Metropolitan Tikhon was presented with the Don Icon of the Mother of God. St Tikhon was praying before that icon during the last days of his life.

His Beatitude Metropolitan Tikhon noted that he was especially glad to offer up prayers at the Donskoy Monastery after the Divine Liturgy celebrated together with His Holiness Patriarch Kirill of Moscow and All Russia at the Cathedral of the Dormition in the Moscow Kremlin. The Primate of the Orthodox Church in America said that he appreciated an opportunity first to lift up prayers at the cathedral wherein St Tikhon had been elevated to the Patriarchal throne and then to visit the Donskoy Monastery wherein he had died.

According to the Primate of the Orthodox Church in America, St Tikhon is deeply venerated not only in the Russian Church, but also in America, because he preached Christ and His power and at the same time embodied humility and dedication to prayer of a common monk.

His Beatitude Metropolitan Tikhon presented the brethren of the monastery with an icon of the Holy Hieromartyr Juvenal of Alaska and a particle of the holy relics of St Herman of Alaska.