Source: DECR
Natalya Mihailova | 07 December 2016
On 5 December 2016, His Holiness Patriarch Kirill of Moscow and All Russia, while on a visit to the diocese of Korsun, gave a brief press conference to representatives of the mass media. 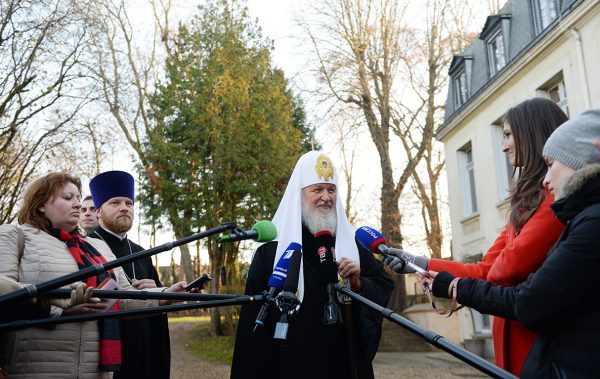 Question: Your Holiness, please tell us about the outcomes of your first visit to France. What are your personal impressions?

Patriarch Kirill: I am satisfied with the visit. Its programme was well prepared, and of course, I am greatly encouraged by the results of the meetings and discussions I had.

The event of major importance was the consecration of the cathedral in the centre of Paris. When discussing this topic with various people, I often heard that it was a historic event, a miracle that had been hard to believe just a little while ago. The Lord helps implement the most incredible projects that might seem a miracle when carried out.

It is difficult to overestimate the fact that a Russian Orthodox cathedral and an Orthodox Spiritual and Cultural Centre have appeared in the heart of Paris. Various French public figures have already shown interest in what can be developed at this centre to help our peoples, in spite of not so favourable political context, have a deeper mutual understanding and sympathy grounded in our history of the early 20th century and of the previous centuries… The tragedies of the past century show that the Russians and the French used to be allies supporting each other. May the tradition of the good allied relations develop and help, in the face of the current political challenges, set forth a well-grounded position, beneficial to both sides.

Question: What message have you conveyed to the French President Hollande? What did you speak about, and what was his reaction to your words?

Patriarch Kirill: It was a very good visit, organized at a high protocol level, and we had a very good discussion. Of course, we focused on the situation in the world, first of all in the Middle East, on the plight of Christian and other minorities in the region. It is well known that right from the start the Russian Church has been expressing her position with utmost clarity, urging the world community to acknowledge that Christians in the Middle East are being subjected to genocide.

I think that the Joint Declaration we signed with Pope Francis helped promote these ideas. Both sides held absolutely the same views on the Middle East problem. It also should be noted that in spring 2016 (by the way, soon after my meeting with Pope Francis), France submitted very important proposals to the United Nations Security Council concerning the plight of Christian minorities. During my meeting with the President I had an impression that he was clearly concerned over the situation of Christians and other minorities in the Middle East.

We also raised the issue of Ukraine. I set forth the peacemaking stand that our Church takes, supporting neither side and regarding it as her duty to do all within her power to reconcile people and settle this serious civil conflict.

Of course, during our meeting we also discussed such historic event as consecration of the cathedral in the centre of Paris. I have to say that everyone I met spoke favourably about this remarkable event.

Question: Your Holiness, we see how painful for many French people the topic of legalization of same-sex marriage is. There were mass protests. Did you raise this issue during your visit?

Patriarch Kirill: Yes, we raised it during our meeting with Cardinal André Vingt-Trois, Archbishop of Paris. It is well known that the Catholic Church spoke out resolutely against the legalization of same-sex marriage. And the million-strong marches of the French people, mostly Catholics, were a clear sign of opposition of a considerable part of the population to what had happened.

It should be noted that nothing changes or can ever change in the stand of the Church, for same-sex relations run counter to the Christian morality. I want to say once again that we, neither Catholic nor Orthodox Christians, condemn no one. We do not demand to step up measures against the people who have some peculiarities in their sexual identity. Yet, we strongly object to likening these relationships to the marriage that is ordained by God and results in childbearing and continuation of life of the human race. What is a part of God’s dispensation cannot be altered by any political doctrines or any political practice. This is what the Church bases her position on.

Question: Your visit took place at a time of challenges for the bilateral relations and for the relations between Russia and Europe. Did you feel that there is perhaps a desire to get the dialogue back on track?

Patriarch Kirill: I experienced no difficulties. Great many people whom I met have warm feelings towards Russia, realize the importance of Russian-French relations and pay a tribute to our common history.

Indeed, how can one not pay a tribute to such a history! On Tuesday I celebrated the divine service in the Kaliningrad Region. In the town of Gusev (former Gumbinnen) a new church had been built, and I consecrated it. It is a place where the dreadful tragedy occurred: the Russian army of General Samsonov was crushed there, in East Prussia, in August 1914. Why did the Russian people die there? East Prussia was Germany’s territory at the time. It happened because the Russian state took on a duty of helping the French people and preventing Germany from occupying their country and capturing Paris. In order to not let the Germans use all their forces to occupy France and Paris, the Russians opened the second front. And as is known, Samsonov’s army was crushed.

Can we ever erase such episodes from our common history? No, never. I appreciate that many people remember and know about it. Perhaps, all this is the ground for our mutual sympathy which was fully manifested during my visit.