Source: Union of Orthodox Journalists
Primates of the Alexandrian, Antiochian, Jerusalem and Cyprus Churches called to defend believers and their sacred temples from "any violent acts."
Pravmir.com team | 20 April 2019 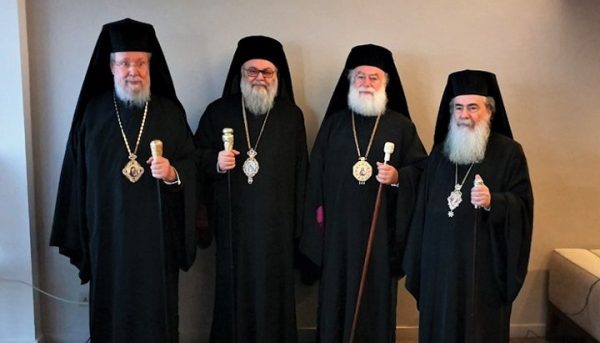 On April 18, 2019, Patriarch Theodoros II of Alexandria, Patriarch John of X of Antioch, Patriarch Theophilos III of Jerusalem and Archbishop Chrysostomos II of Cyprus gathered in the Holy Archdiocese of Cyprus to discuss topical church issues. The Primates separately discussed the church situation in Ukraine, according to the Department for External Church Relations of the UOC, with reference to the official communique issued after the meeting.

The discussion of church-related problems and ways to solve them began with a prayer for the peace and well-being of the holy Local Churches.

Referring to the situation with the seizures of the temples of the Ukrainian Orthodox Church, which particularly stepped up after the Constantinople Patriarchate had intervened in the Ukrainian church life, the Primates called on all parties to work on “protecting the faithful as well as sacred temples and monasteries from seizures and any violent actions, no matter where they come from or whatever reasons or motives gave rise to them.”

In this context, Archbishop Chrysostom of Cyprus reminded that he was ready to take on the role of an intermediary in resolving the Ukrainian issue. Primates of the Alexandrian, Antiochian and Jerusalem Churches agreed with this initiative, noting that the continuation of this mission by the Archbishop of Cyprus can serve “for the benefit and unity of the Orthodox Church.”

Also, the holiest Primates of the four ancient Churches emphasized their joint determination to continue communication and cooperation for the benefit of the Holy Church, noting that in Orthodoxy “there may be different points of view”, but the Church remains united under the direction of the Lord Jesus Christ, continues its saving mission in the world and prays so that the Lord, through His life-giving grace, heals various wounds of our nations and, through the Light of Christ’s Resurrection, enlightens the hearts of all believers and leads everyone to unity in faith and love.

As the UOJ reported, the Patriarch of Alexandria, Theodoros II, said earlier that he was praying and worried about the church situation in Ukraine.