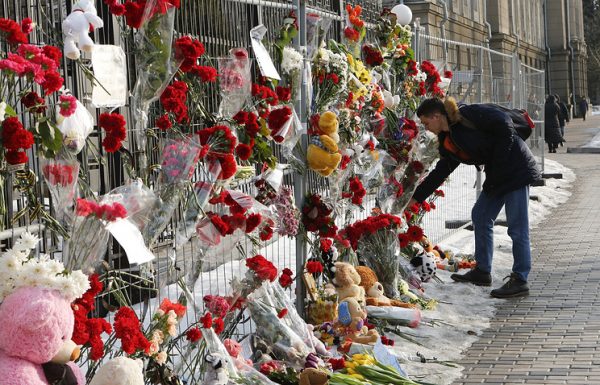 Messages of condolences keep coming to His Holiness Patriarch Kirill of Moscow and All Russia from the Primates of the Local Orthodox Churches.

His Holiness Patriarch Bartholomew of Constantinople:

It is with a heavy heart that we learned of the devastating news concerning the fire in the Winter Cherry shopping centre, which took the lives of so many people – both children and adults. We are at a loss for words witnessing the unfathomable tragedy which the mass media has conveyed, and we remain in prayerful contemplation for the victims and their family members. As we journey towards Christ’s triumphant entry into Jerusalem, we grieve as our Lord did for the death of His good friend, Lazarus, while holding within us the assurance of the Resurrection and the promise of the life to come.

In this moment of sorrow and mourning, we would like to personally convey our heartfelt condolences, as well as the collective sympathies and prayers of our Ecumenical Patriarchate. May the Lord of life and death grant eternal rest to all those who tragically lost their lives, and may He grant peace and comfort to those whose hearts have been broken and injured by these days’ events. We will continue to stand in a spirit of solidarity with you and those suffering.

Expressing these sentiments of commiseration, we embrace you with a fraternal kiss in the Lord, and we remain with much fraternal love and honor.

His Holiness Patriarch Irinej of Serbia:

With great sorrow we convey to you the most sincere condolences on our behalf and on behalf of the plenitude of the Serbian Orthodox Church over the tragedy in Kemerovo which has already claimed the lives of 64 people, mostly children.

We are praying together with you and our fraternal people of Russia for the recovery of all the injured, for the consolation of all those who lost their relatives and friends in this terrible fire, and for the repose of the souls of the victims.

Memory eternal to the victims!

Your Holiness’ brother and concelebrant in Christ,

His Beatitude Metropolitan Rastislav of the Czech Lands and Slovakia:

In the season of Lent, when people of God are preparing to celebrate the Radiant Resurrection of Christ – and it is already next Saturday that we will commemorate the raising of Lazarus of the Four Days – we have received the terrible news that in the city of Kemerovo people died and were injured in the fire that broke out in the shopping centre. Your Holiness, please accept the most sincere and profound condolences over this tragedy from the plenitude of our Local Church. We are praying for the soonest recovery of the injured, for the consolation of those who lost their relatives and friends, especially children, and for the repose of the souls of the innocent victims. We believe that the All-Merciful Lord will raise the souls of His servants, granting them life eternal.