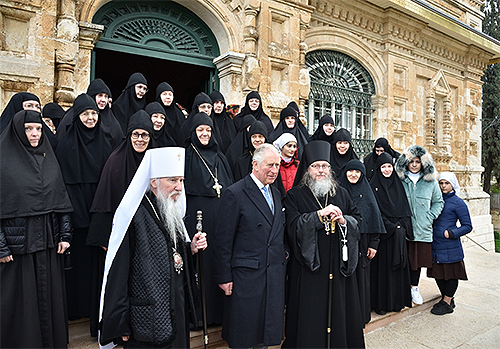 Concluding his official visit to Israel and Palestine, His Royal Highness Prince Charles of Wales visited the Convent of Mary Magdalene, Equal-to-the-Apostles in Gethsemane, Jerusalem, where the great-great-aunt and grandmother of the heir to the British Throne are buried.

Prince Charles represented England during the International Holocaust Remembrance Day in Israel. This year marks the 75th anniversary of the emancipation of Auschwitz by Russian soldiers.

His Royal Highness also visited the Church of the Nativity of Christ in Bethlehem, Palestine. The Chief of the Russian Ecclesiastical Mission in Jerusalem, Archimandrite Roman (Krassovsky), represented the mission during the Bethlehem celebrations.

On January 24, 2020, Prince Charles visited the convent, where Fr Roman greeted him. The Chief of the Mission escorted the Prince to the convent church, dedicated to St Mary Magdalene, where His Eminence Metropolitan Mark of Berlin and Germany and Abbess Elizabeth (Smelic), head of the monastery, welcomed him with the traditional Russian bread and salt. A bouquet of flowers was presented to Prince Charles by a student of Orthodox Bethany School for girls.

Vladyka Mark took the royal into the church, where the nuns sang the church’s troparion. Many Years was then intoned to “Her Highness Queen Elizabeth, His Royal Highness Prince Charles and the Entire Royal Windsor Family” in English. They proceeded to the crypt of the holy relics of Holy Grand Duchess Elizabeth, who was the great-great-aunt of Prince Charles. He venerated the crypt and placed flowers on the crypt and lit a candle.

The Chief of the Mission gave a brief account of the dramatic story of the transfer of the coffin containing Grand Duchess Elizabeth’s body to Jerusalem. The prince was also shown other relics relating to the tragic fate of his holy relation kept at the convent—a bloodied remnant of the coat worn by her spouse, Grand Duke Sergei Alexandrovich, when he was assassinated.

His Royal Highness also venerated the crypt of Nun Barbara, St Elizabeth’s aide, and lit a candle there.

Spending some time with the convent’s sisters, the prince agreed to have a photograph taken with them and the children of Bethany’s boarding school.

Prince Charles also visited the crypt of his grandmother, Princess Alice of Greece and Denmark.

After the death of her husband, Princess Alice, emulating her aunt, was tonsured to monasticism and founded the Sisterhood of SS Martha and Maria in Athens, Greece. She copied the organization of the Convent of Martha and Maris in Moscow established by St Elizabeth. Princess Alice died in 1969. Her body was taken from England to Jerusalem in 1988. Prince Charles was close to her.

The nuns sang Eternal Memory to her. Prince Charles then asked to be left alone for a brief time at her tomb.

Upon exiting, His Royal Highness, accompanied by Metropolitan Mark and Fr Roman, thanked the Abbess and her sisters for the heartfelt and warm reception and departed the convent.