Source: Breitbart
Tens of thousands of demonstrators took to the streets of Bratislava, Slovakia, Sunday to protest against abortion and appeal for stricter laws to defend the unborn
Thomas D. Williams, Ph.D. | 24 September 2019 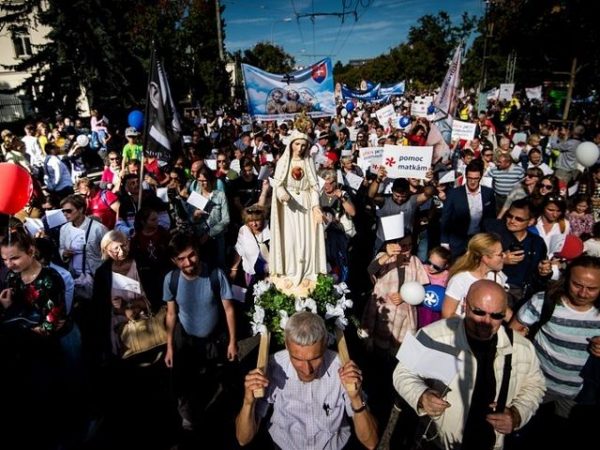 The National March for Life drew over 50,000 people, according to the Catholic Bishops’ Conference of Slovakia, which organized the demonstration.

“Man does not give himself life; it is a gift he has received,” said Bratislava Archbishop Stanislav Zvolensky.

“We want freedom for unborn children so that they can freely live their human life,” one of the protest leaders, Marek Michalcik, told the crowds.

In Slovakia, a predominantly Catholic country, abortion is legal up to 12 weeks of pregnancy, while abortion for medical reasons is allowed up to 24 weeks. This legislation dates back to the days of communist rule in the nation.

The country’s current law is rather permissive when compared with that of more restrictive European countries on the subject, such as Poland and Malta, where abortion is practically allowed only in the case of rape.

Organizers of Sunday’s march called on public officials to actively support institutions that help families in need as well as pregnant mothers and their children.

In early September, the Slovak parliament began discussing changing the abortion law, with pressure from conservative parties would to limit abortion to the first six or eight weeks of pregnancy, or to ban it altogether.

The ruling parties — the social democrat party Smer, leftist but conservative on social issues, and the Slovak national center-right party SNS — have not yet expressed themselves on the subject.

In Slovakia, a member of the European Union, Catholics make up almost exactly two-thirds (66 percent) of the population of 5.4 million.