Provocation against Church and State

On Friday the Khamovnichesky court in Moscow extended the pre-trial detention of  Nadezhda Tolokonnikova, Maria Alyokhina and Ekaterina Samutsevich, until January 12, 2013 with their preliminary hearing to continue on Monday July 23. 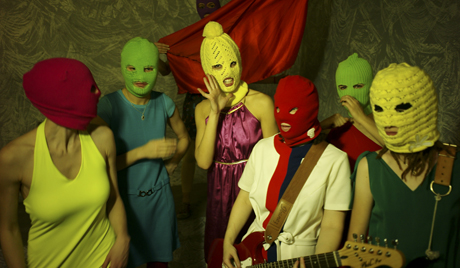 The three members were part of a group of four who entered the holiest church for followers of the Russian Orthodox Church, the Christ the Savior Cathedral on February 21, 2012, and from a sacred area where only ordained priests are allowed to be present, proceeded to sing an anti-Putin song disguised as a church hymn, filled with obscene language and making a mockery of the entire Christian faith.

Their action coincided with other staged and carefully organized anti-Putin provocations which were taking place before the past presidential elections, and like almost all of the other “opposition” groups and individuals, their only goal was to foment hatred towards and do everything possible to damage the popularity of then presidential candidate Vladimir Putin.

The majority of Russians hold the view that the group went way too far in their activities with most people of the opinion that their actions were everything from an act of sheer brainlessness to a carefully planned insult to the Orthodox Church, the Russian people and the Russian state.

This was evident at Friday’s hearing where more people in protest of the group showed up outside the court to protest what many of them see as an attack on morality, family values and their faith.

Supporters of the group, strangely enough, appeared outside the court at the time the women were exercising their constitutional right to defend themselves before the court, holding signs asking for mercy from the same church that those in custody had blasphemed.

Although the women had already been in custody for four months their behavior in front of the court in no way showed remorse for what they had done, nor did the statements and actions of their lawyers who filed almost a dozen briefs and then blamed the court for not being able to deal with all of them in one sitting.

The women were all smiles and as in evident by witness statements, news reports, and video and still footage, they behaved as if the whole thing were a big joke, smiling and looking glib and not showing even the slightest hint of remorse.

Their lawyers told the press, and I am paraphrasing, that the whole process was a circus. Strange when they are demanding the President of the Russian Federation Vladimir Putin and the Patriarch of Moscow and all Russia and Primate of the Russian Orthodox Church Kirill I appear in court as witnesses, although neither was even present or connected with the foolish stunt in anyway.

Sadly, as can now be expected, the Western media and even Amnesty International have jumped on the bandwagon and are portraying the women as innocent victims of evil machinations. The latter saying on Friday that;”…it considers the three women to be prisoners of conscience detained solely for the peaceful expression of their beliefs.”

Had the event taken place at the Evergreen Chapel located in Camp David where U.S. President Obama prays or in the Holy See or from behind the pulpit where the Pope addresses Catholic believers, would they be so quick to defend those guilty of such an act of desecration? Even those at war with the West do not dare to, or have enough taste not to, blaspheme the holy places of the people. Why should this event be deemed as somehow being acceptable and a peaceful expression of beliefs when it occurred in Russia?

As more Russians begin to understand the resonance that is being caused by what these women did, the crowds outside the court will no doubt grow larger and the views of those who have been largely quiet will begin to be heard, not in support of these women, but against the affront to all Russians.