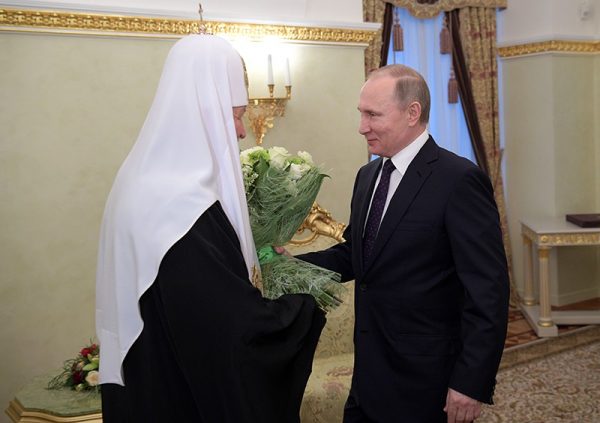 At their meeting in Moscow on Wednesday the patriarch thanked Putin for help in promoting the dialogue between the church and the state.

For his part, the president pledged to continue this work.

“After eight years I can judge what a significant distance has still been walked, what dynamic this process has and what vector. And all this causes a very profound satisfaction with our pious people and, I think, with our whole society as well. Because this fosters our common consolidation, a concentration of forces for dealing with the problems facing our country today,” the patriarch said.

In response Putin thanked him for this work.

Igor Alexandrovich Zadera is a Russian graphic artist and lithographer. He graduated from Moscow State University of Printing Arts in 1997. He has been a member of the Russian Artists’ Union since 1992 and of UNESCO’s International Association of Art since 1993. Zadera uses the technique of manual print of original chromolithography and original hand-made paper.

The pictures are engraved and printed by the author personally on a hand-moulded paper. The series was produced in Moscow in 2010 at a lithographic print workshop of the M.B.Grekov Studio of Military Artists.

Most viewed articles
Our Lenten Journey112
The Heart of the Scriptures107
Serbian Patriarch Porfirije Gives Interview to Serbian National Television83
Patriarch Kirill Speaks on the Only Right Path74
Metropolitan Onuphry: Fasting and Prayer Are Two Wings That Help People Draw Near God66
Metropolitan Hilarion: Real People in the Virtual World of the Internet Also Need to Hear the Word of a Priest63
Reading the Bible Has Given Christians Hope During the Pandemic – Survey35
Bishop Benedict of Bistrița in Relation to Young People: I Want to Be One of Them35
Moses and the Ten Words25
Sunday of the Samaritan Woman2
Most popular authors
Pravmir.com team321
Priest Luke A. Veronis112
Frederica Mathewes-Green107
Aurelian Iftimiu35
Archpriest Lawrence Farley25