Source: DECR
Natalya Mihailova | 03 February 2017
On 1 February 2017, the 8th anniversary of enthronement of His Holiness Patriarch Kirill of Moscow and All Russia, a reception was given at the Cathedral of Christ the Saviour, following the Divine Liturgy. 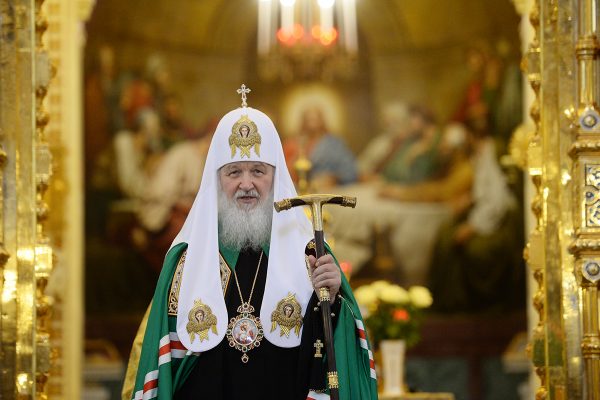 Congratulating Patriarch Kirill on behalf of representatives of the Local Orthodox Churches, Metropolitan Nifon of Philippopolis said in particular:

“Your Holiness, the day of your elevation to the Throne of Moscow and All Russia is of great importance not only for your millions-strong flock, but for the whole Christian and especially Orthodox world.”

“Being an uncompromising defender of the Orthodox faith, you bring to people the glad tidings of Christ’s unchanging truth. For over twenty years your TV programme “The Pastor’s Word” has being showing to its viewers the way to the truth. As for your books, they open up before their readers the correlation between freedom and responsibility.

“Rejoice now, the Russian Church, for your Primate is a fisher of men who strives to lead his people to salvation! The unique many-sided personality of the Russian Patriarch inspires respect and admiration all over the world among those who read his books and hear his presentations at various international forums and conferences.

“Your Holiness, the Orthodox world sees in you a man who continues the apostolic labours, an apologist of Christianity, a defender of moral values.

“Greeting you with the anniversary of your enthronement, we, representatives of the Local Orthodox Churches to the Holy Throne of Russia, ask the Lord to grant you the weakness that St Paul writes about (2 Cor 12:9), so that nothing might prevent God from working through you. May the Lord protect you for many years to the glory of Him Who is the way, the truth, and the life (Jn 14:6).”

The Primate of the Russian Orthodox Church thanked all those present, saying in particular:

“First of all, I am grateful to you for your prayers, which I am aware of and which give me spiritual support. Even when my physical and sometimes spiritual energies are strained to the limit, I feel that new ideas and an inspiration come, realizing that it can have nothing to do with human powers. Therefore, I ask you to continue to commemorate me in your prayers, because sincere prayer reaches God, and the Lord helps through your prayers.”

“There has always been conciliarity in the Church, and decisions have been taken, based on a wide-raging discussion. Recently the Inter-Council Presence completed its plenary session. For the two days we edited two documents. It is not an easy task for 150 people to draft a text, with everyone having an opportunity to express his or her opinion and put forward proposals. However, we managed to prepare the balanced text. Neither the Patriarch nor even the Synod would be able to do what we did together – bishops, clergy, laypeople, men and women, young and old – all those who took an active part in the discussion.”

As His Holiness noted, much of what seems impossible is done in the Church through the prayers of the faithful. “We send up our prayer to God, and in response God grants us His grace, that is why the Church is invincible, and the gates of hell will never prevail against her,” he said, “It does not mean that we must do nothing. The Lord never helps the idle, those who refuse to make their part of the journey. If we do all we can the Lord will succor us.”

After the reception, His Holiness Patriarch Kirill was greeted by the members of the Holy Synod, bishops, representatives of the Local Orthodox Churches and Synodal institutions, hegumens of stavropegic monasteries, and the clergy at the Throne Hall of the Patriarchal Chambers of the Cathedral of Christ the Saviour.

Most viewed articles
Seven Lessons for the New Year from St. Seraphim of Sarov208
The Perfectionist112
New Jersey Governor Signs Bill Legalizing Abortion Up To Moment of Birth91
The Way of Christ Is The Way of Love58
140th anniversary of repose of St Antipas the Athonite of Calapodești celebrated in Roman56
Metropolitan Hilarion Celebrates the 20th Anniversary of His Episcopal Consecration53
A Great Time to Join the Orthodox Church20
How We Worship: the Struggle of the American Experience1
1
Sunday of the Samaritan Woman1
Most popular authors
Priest Luke A. Veronis208
Protopresbyter Themistoklis Mourtzanos112
Ryan Foley91
Fr. Theodore Stylianopoulos58
Aurelian Iftimiu56
Pravmir.com team53
Frederica Matthewes-Green20