Source: Sputnik News
Russian President Vladimir Putin and Pope Francis discussed the issue of protection of Christians in regional conflict zones and cooperation in the cultural-humanitarian sphere in a phone call on Saturday, the Kremlin said in a statement.
Natalya Mihailova | 18 December 2016
MOSCOW (Sputnik) — Earlier in the day, Putin wished Pope Francis a happy 80th birthday and expressed desire to meet in person and discuss global issues. 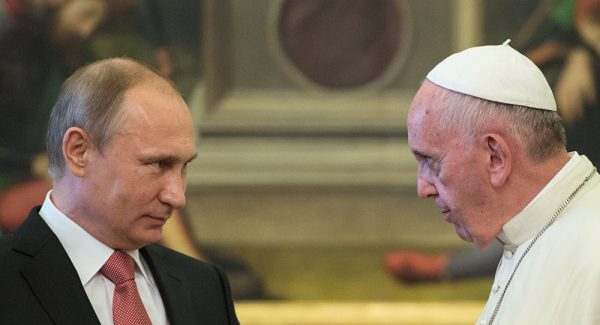 “The Russian president and Pope Francis exchanged views on the issues of protection of Christians in regional conflict zones and the importance of a constructive interconfessional dialogue to preserve moral principles in the international affairs,” the statement read.

Earlier in the day, the Russian president also praised the Pontiff for overseeing a historic breakthrough in Catholic-Orthodox relations, adding that improved relations between Russia and the Vatican can also be significantly credited to the pope.

In February, the head of the Russian Orthodox Church held historic talks with Pope Francis in Cuba’s capital, Havana, where they issued a joint declaration urging global action to stop the persecution of Christians.