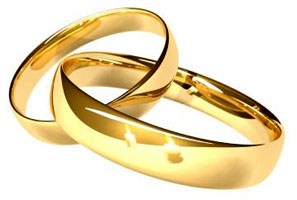 What does the marriage ceremony grant exactly to a couple that would help form a lasting relationship?

Fr. Richard Rene, priest of Saint Aidan Orthodox Church, Cranbrook, BC, Canada: Nothing in and of itself. After all, it is not magic! We need to remember that the rite of matrimony did not develop in the Orthodox Church until the 8th century. Until then, Christians were married in a civil ceremony (or at home), and when they came to Church to receive the Eucharist as man and wife, their marriage was blessed. A lasting marriage is built first and foremost on the mutual commitment of the couple to Jesus Christ and His Church. The rite of matrimony exists to call a couple to live this life, to make Christ manifest in their lives together. How they answer that call is entirely up to them.

Sub-deacon Joseph Gingrich, seminarian at Christ the Saviour Carpatho-Russian Orthodox Seminary in Johnstown, Pennsylvania: It grants them a sacrament. The rite of matrimony offers sanctifying grace to the couple and confers this grace upon their souls. Only a marriage in the Church facilitates this grand blessing

Frederica Mathewes-Green, noted Orthodox writer, radio commentator and speaker: The marriage ceremony is a Holy Mystery, a Sacrament, which means that something happens beyond what the human participants bring to the event. God intervenes with his Holy Spirit and creates something holy, something that did not exist before. The marriage ceremony is essential for Christians, so that this immensely significant relationship in our lives may be upheld and blessed by God.

Is a positive, public and committed relationship really an illegitimate relationship without a marriage ceremony?

Fr. Richard Rene: No. A relationship in which two people have publicly committed to sharing the whole of life is a legitimate marriage. However, if Christians marry in this way without a marriage ceremony they are not fulfilling the purpose of their marriage, which is to be an icon of Christ and His Church.

Frederica Mathewes-Green: I wouldn’t use the word “illegitimate.” It is legitimate according to its own standards. But as it rests entirely on the man and woman involved, it is easier to break. It does not draw into witness the entire church community, even those who do not know them personally, including the witness through time. With a church wedding, the couple are surrounded and held together by a much larger, eternal community. This gives their marriage strength and significance that a mere mutual agreement would not have.

What does a couple do if they have entered a marriage but then found out that they are not compatible?

Fr. Richard Rene: Discovering compatibility is not primarily about discovering whether or not you like the same kinds of music, foods, etc. Before marriage, a couple need only discover if they share the same commitment to Christ and His Church, as well as a similar inclination in regards to the bearing and raising of children. This can be discerned through a period of courtship, no more than six months or so in duration. If a couple discovers in the midst of their marriage that they are not compatible, they need to seek marital counseling to determine what their real priorities are, and to perhaps reaffirm a central commitment to Christ.

Sub-deacon Joseph Gingrich: This is a difficult situation and no answer is simple. First and foremost the couple must participate in the sacraments of confession and communion regularly. Second, they must enter into counseling. Third, they must be willing to sacrifice and change. Whether a person is a monk or married, the path to salvation is the same. Mankind is to practice a kenotic love for his fellow human beings. This is the same in a monastery or in a marriage. The couple must love one another as Christ loved the Church. Each couple must truly be willing to sacrifice for the one they love. If the virtue of sacrifice is not there the marriage will not sanctify the couple.

Frederica Mathewes-Green: Compatibility is a moving target. Married couples continually adjust to each other over the years. In every marriage there will always be one thing that, if focused on and exaggerated, will make the partners feel they cannot bear to remain married. Compatibility can be worked at and won if the partners try to live with each other forgivingly, overlooking each other’s bad or annoying habits. Sometimes marriages go through bad stretches where it seems like the relationship is over. Those who love God will get through such times just by continuing, day after day, to persevere. The way to avoid divorce is to keep on not getting divorced.

How can couples find out if they are compatible if living together is not allowed before actually formalizing a committed relationship?

Sub-deacon Joseph Gingrich: The same way people have for centuries; an honest courtship where brutally honest questions are asked of each other. Older couples in the parish should also mentor the prospective couple and go for outings with them. Also, any relationship, especially marriage, is a process of continually learning and falling more into love with the beloved other. As much as a person knows someone you can never know them in their essence. Because of this fact ultimate knowledge of the beloved can never be known and therefore a couple’s love can continually grow. It takes many years to even begin to really know someone. Love is to be like a fine bottle of wine, it simply gets better over time.

What are the prevailing reasons for breakups among Orthodox Christian married couples?

Fr. Richard Rene: Despite some misleading statistics to the contrary, couples who are married according to the rite of matrimony (i.e. have a church wedding), are just as likely to divorce as couples married in a civil ceremony. And unfortunately, the reasons for divorce are exactly the same: irreconcilable differences, abandonment, abuse and adultery.

Sub-deacon Joseph Gingrich: Selfishness and lack of humility which express themselves in an unwillingness to sacrifice for the other.

Frederica Mathewes-Green: I have the impression that in traditionally Orthodox countries the divorce rate is not so high; when people move to America or a similar country, they begin to break up for the same reasons that nonbelievers do. They begin to put themselves first, to think that the relationship is not fair to them, or are tempted to be unfaithful due to the great amount of temptations in movies and entertainment. I don’t think there are reasons that Orthodox couples, in particular, are tempted, but that they run into the same temptations that other people do.