In my experience I’ve had couples who during preparation for the wedding did not know how many children they wanted to have (for example, she wanted only one child and he not less than six), had never discussed the principles of bringing children up and other vital issues. Imagine what awful depression there would be if they wed!
Orthodoxy and the World | 30 May 2010 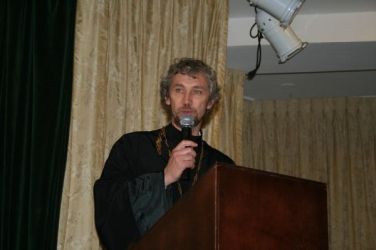 Q: What does the marriage ceremony grant exactly to a couple that would help form a lasting relationship?

Fr. Yaroslav Belikow, a parish priest of Holy Virgin Joy of All Who Sorrow Cathedral, San Francisco, CA United States:  An unbelieving person cannot understand what grace or God’s presence is. This is why we will address believers only.

Marriage is not simply God’s blessing for a man and a woman to live together, to give birth to children and to bring them up; marriage is also a Mystery. The Holy Church has only seven Mysteries, whereas there are many blessings – in fact for all events in life. In a Mystery, Divine Grace, not perceived by any physical feeling, is transmitted, and with its help a person becomes a new, spiritual creature. With its help people achieve their salvation. But this grace maintains intact the freedom that God has given people; it does not force them to become better, to flee from evil or to do good. When people ignore God’s grace, it gradually leaves them. Finally, grace received in a Mystery must be cherished, fostered, and cultivated in one’s heart.

This is why Baptism is a spiritual birth and it cannot be repeated, but Confession (spiritual healing) and Communion (spiritual nourishment, refreshment) are repeated.

In the Sacrament of marriage two become one flesh (Gen. 2:24). And what is meant is not sexual copulation, but spiritual unity, the unity of souls. Apostle Paul uses this line twice, “they two shall be one flesh” (Eph. 5:31 and 1 Cor. 6:16), but when a sinful copulation is meant this text is paraphrased, and the Apostle writes, “he who unites himself with a prostitute is one with her in body” (1 Cor. 6:16), because there is no sacred unity, no Mystery there.

We often understand Christ’s words, “For where two or three are gathered together in My name, there am I in the midst of them” (Mt. 18:20) as referring to public prayer in church, not belittling private prayer at home, but only emphasizing the importance of the whole community’s prayer. But these words should also be referred to the Mystery of marriage: husband and wife are also gathered together in the name of the Lord! So, only through a wedding do husband and wife achieve sacred unity and Christ’s presence in their marriage.

Q: Is a positive, public, and committed relationship really an illegitimate relationship without a marriage ceremony?

In this case there has been no sacramental unity yet. This is why in God’s eyes this relationship is illegitimate. In marriage man and woman not only undertake mutual obligations but also take up responsibility for their marriage before the Lord. It is no secret that human emotions fluctuate. However, when the feeling is supported with the realization of commitment not only to a certain person, but also for the marriage with this person, it is easier to bear hardships that come across in married life. On the other hand, imagine what happens if today’s hardships are to be overcome with the only support of the memory of feelings one had long ago.

Q: What does a couple do if they have entered a marriage but then find out that they are not compatible? How can couples find out if they are compatible if living together is not allowed before actually formalizing a committed relationship?

A couple that finds they are not compatible should have never get married.

There is a process of courtship. Unfortunately, nowadays few people take courtship seriously. This is a wonderful time in the relationship to be used in order to get to know the other person better, to get to know yourself better, and to find out if you are compatible. Since Adam and Eve’s Fall there have been no perfect men or women. Each of us has a number of weaknesses, drawbacks, bad habits, fears, and insecurities. You should find out the main shortcomings in the person before you ‘formalize’ your relationship, and analyze yourself thoroughly: are these drawbacks suitable for me? Can I live with them? Some people think they can rectify another’s defects (why in this case don’t they rectify their own?), they believe that the other person must reform out of love, or that they can make the other person change. We are what we are. And we have to accept the person we want to join for life, for what he or she is. Or we should decide not to accept him or her; there will appear another person who will suit this one.

For deep acquaintance one needs time. I think a year and a half is enough for getting the correct idea of the person and your relationship.

There’s a wise ancient saying that to get to know a person better you have to see him or her in three situations: that is drunk, in rage, and with money. These are very characteristic, as in these situations a person becomes quite transparent, their character becomes extremely clear. I would add another idea, a state of emergency when the first instinctive reaction tells volumes about the person.

During the period of courtship you should talk a lot, discussing everything. In my experience I’ve had couples who during preparation for the wedding did not know how many children they wanted to have (for example, she wanted only one child and he not less than six), had never discussed the principles of bringing children up and other vital issues. Imagine what awful depression there would be if they wed! And we are not talking about ‘incompatibility’ yet, only personal desire on his and her part to have a certain number of children. This is only one example, and I think it illustrates the relationship well.

To find out answers to vital questions one needs a lot of time. Situations and questions appear naturally and unconstrainedly. Unfortunately, many people hurry to achieve their happiness for a lifetime, they have no patience, and many of them repent bitterly for a lifetime.

There is also one more interesting element here, that is sex. Modern society, supported by mass media, considers sex to be a harmless pastime, especially when the couple plans to be together for many years. Sex has been given to us by the Lord and it is a creative force. But when misused, it can be very destructive. Sex brings man and woman close. In the right context, it gives a more thorough understanding of each other, more tender feelings, multiplies mutual trust, and so on and so forth.

But sex is to be evaded during the period of courtship. Courtship is the time to get to know each other from all sides, all the qualities and shortcomings. If we find we are incompatible, we are not to lose time as we should break up. However, if we have had sex, on the one hand, we are much more emotionally attached than we can even imagine, and on the other hand, we do not want to lose this wonderful feeling of intimacy (and pleasure), and this is why it is harder to break up. Even if you understand that this is not your partner for life.

Of course, during the period of courtship it is hard to break up with the person if you have invested lots of time, emotion, and hopes into the relationship. And imagine what happens if you live with this person? Financial issues get involved to aggravate the situation.

This is why in the seventh commandment the Lord laconically but categorically prohibits any kind of extramarital sexual encounters.

I say it again, to get to know each other better you need time, and for this you should discuss all the sides of life including sex.

Look, I have not mentioned venereal diseases and unwanted pregnancy.

Q: What are the prevailing reasons for breakups among Orthodox Christian married couples?

In the majority of cases people come to us when they have already got a civil divorce, they live separately, and one of them (or both) has committed with another person. As the most frequent reason of the breakup they mention ‘incompatibility.’ I think that 85 per cent of the divorces could have been prevented if the marriage had been worked at in proper time. The modern philosophy of life speaks of ‘instant gratification.’ As we are told that everything must come easily, at the first sight of any difficulty spouses they do not want to be patient and work at themselves and at their relationship. If they talk to their spiritual father and work at themselves and at their relationship, they can not only save their marriage but also make it stronger. Ten percent of marriages should have never taken place (and it could have been foreseen at the stage of courtship), and the remaining five percent are the result of adultery, physical violence on a spouse’s part, or dependence (on alcohol, drugs, or computer) developing in the course of time after the wedding.