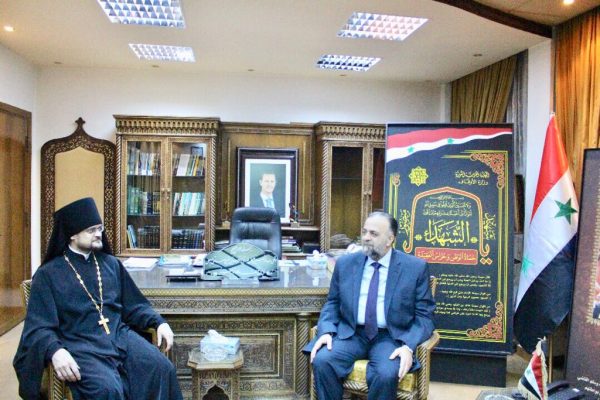 On February 4, 2018, the delegation of the interreligious working group under the Russian President’s Council carried out a major action for distribution of humanitarian aid to suffering people in Syria.

During the whole Sunday, the delegation members together with representatives of Christian Churches and Muslim communities in Syria distributed in churches and mosques the aid donated by Russian believers.

Christian priests and Muslim clergy unloaded cars with humanitarian aid and distributed it together to Syrians in need regardless of their religious affiliation.

The amount of the distributed goods set record – 77 tons. The cargo was prepacked in over 25 kg-boxes each intended for one family. The foodstuff kits formed taking into consideration the real needs of the Syrian population included flour, sugar, cereals, pasta, dried milk, sunflower oil and canned fish and meat. Syrian beneficiaries pointed to the high quality of the foodstuffs, the right choice of the goods and that many things in the list are very difficult to obtain in Damascus. The contents of each box can be sufficient to sustain a family of five for at least two weeks.

The project is supervised personally by His Holiness Patriarch Kirill of Moscow and All Russia. The direct management is carried out by Metropolitan Hilarion of Volokolamsk, head of the Moscow Patriarchate department for external church relations (DECR). It is an unprecedented action because never before such a full-scale interreligious delegation ever visited warring Syria to distribute aid and nobody ever realized such a project together with representatives of all the major religious communities in Syria.

The action began early in the morning at the religious and educational center of the Sheikh Ahmad Kuftaro Islamic Association. The guests from Russia were welcomed by the director of the association, Sheikh Shreef as-Sawaf and Mufti Adnan Afyuni of Damascus and the region. The delegation was introduced to the work of the educational center and saw classrooms. Then, in one of the streets in Damascus close to the Religious Center, a joint distribution of aid to people in need took place. As the Damascus religious leaders noted, in the recent time the population of the city has increased by a half million people from other regions in Syria who have had to leave their ruined cities and villages escaping from terrorists. These were the people who received aid at that distribution station.

After that, the interreligious delegation from Russia came to the cathedral of the Orthodox Church of Antioch dedicated to the Dormition of Our Lady, called al-Mariyamiyeh. The delegation members attended the Divine Liturgy celebrated by His Beatitude John X, Patriarch of Great Antioch and All the East.

After the service His Beatitude greeted the Russian delegation, first of all expressing gratitude to His Holiness Patriarch Kirill of Moscow and All Russia for his concern for suffering Syria. His Beatitude said, ‘Quite recently we have been to Russia for the celebrations devoted to the centenary of the restoration of Patriarchate in the Russian Orthodox Church. The week we spent in Moscow became the best time in our life. We had a long talk with His Holiness and met with Russian President Vladimir Putin and we will never forget these meetings. We are unspeakably thankful to Russia for her assistance in liberating Syria from terrorists. And we believe her effort to establish dialogue between Syrians is vitally important for our country’.

Then the Russian delegation and the clergy of the Orthodox Church of Antioch together distributed boxes with humanitarian goods to people. In that place, 500 boxes with foodstuffs were distributed. Many benefactors were in urgent need of food because of undernourishment.

After the distribution, the Russian delegation had a talk with His Beatitude John X at the Patriarchate. He asked to convey profound gratitude to his brother, Patriarch Kirill and to the leaders and faithful of all the religious communities in Russia for the aid they collected. The leader of the interreligious delegation, Hieromonk Stephen (Igumnov) speaking on behalf of the delegation expressed gratitude to Patriarch John X for the warm welcome and asked for his blessing upon the further conduct of the charitable action, noting the importance of the fact that it had begun with the Muslim center in Damascus and the cathedral of the Orthodox Church of Antioch. Father Stephen stressed that this Church is the oldest one in Syria and is still taking pastoral care of the largest Christian community in the country and the Mariyamiyeh Cathedral is the main Christian center in Damascus.

The next point on the route of the action was the cathedral church of the diocese of Damascus of the Armenian Apostolic Church, in which aid was distributed together with His Grace Bishop Armash Nalbandian and local clergy. The diocesan center for urgent aid helped to invite to the event those in the greatest need in the respective humanitarian list. The Syrians who received aid in that church, just as those who received it in other distribution places, wholeheartedly thanked the Russian people for the love and mercy they showed. Bishop Armash stressed that for the first time in a long period he could see smiles on many faces, and it was the main result of the action since it was not only a distribution of aid but also a personal coming of clergymen from Russia to their brothers in Damascus in order to express their support for them. He also said that during the war several shells launched by militants hit the territory of church taking their toll among parishioners and causing damage to the church and the Sunday school.

From the Armenian church the delegation proceeded to the neighboring block in the historical center of Damascus to visit a church of the Syriac Orthodox Church in which the St. Ephrem Charity is accommodated. This place is located close to the House of St. Ananias in which certain events of the New Testament history took place.

After the distribution of another portion of aid, the interreligious delegation from Russia went to the Darar Bin al-Azour Mosque in which the University of Islamic Sciences is situated. The guests were welcomed by its rector, Sheikh Husamiddin al-Farfour and a group pf ulemas and numerous faithful. A warm talk took place in which it was stressed that there is and can be no enmity between people of religion and that the terrorists’ attempts to justify their crimes by pseudo-religious slogans would never mislead true Christians and Muslims who seek to set an example of mutual love and respect. Afteer the talk, a distribution of aid to people in need took place in the courtyard of the mosque.

Then the Russian delegation visited the Highest Muslim Administration in Syria to meet with the Grand Mufti of Syria, Sheikh Ahmad Badreddin Hassoun. At Mufti Hassoun’s request, the aid conveyed to him will be sent to the suffering people of Aleppo. The Grand Mufti extended condolences upon the death of Russian pilot A. Filippov, noting that the Syrian people will always remember his sacrifice, just as the blood of other Russians who shed it for the liberation of Syria. He also asked to convey cordial gratitude to His Holiness Patriarch Kirill and called him his beloved brother.

The action continued till late in the Sunday evening. The last place visited on that day for distributing aid was the church of the Evangelical Church of Damascus. The pastor of the local community, Boutros Zaur said that a year ago the roof of the church was hit through by a militants’ shell and destroyed a considerable part of the premise including the altar. However, the community managed to restore the building.

The delegation was accompanied through the action by Archimandrite Alexis (Shekhada), head of the social department of the Orthodox Church of Antioch, and Mr. Nabil Suleiman, advisor to the Minister of Awqaf, who took part in the distribution of aid.

Late in the evening, the delegation met with Mr. Mohammed Abdul-Sattar Al Sayed, Minister of Endowment and Religious Affairs.

On behalf of the minister a reception was given at the old mosque in Damask, Salah ad-Din, which was attended by an assembly of ulemas in Syria – religious scholars and heads of Islamic organizations under the Ministry of Awqaf, including the oldest Mufti of Damascus, Sheikh Bashir al-Idari. Discussed in the talks was the importance of the Congress of the Syrian People convened at Russia’s initiative in Sochi and the role of religious communities in the process of reconciliation.

The humanitarian mission of the interreligious delegation from Russia will continue in the next few days.

Most viewed articles
Five Signs of a Modern Pharisee208
ROC Holy Synod Discusses the Announcement of the Patriarchate of Alexandria Concerning the Establishment of the ROC Patriarchal Exarchate of Africa154
Bad Habits And Their Cure109
Medical Workers Walk 1.5 Km Through Snowdrifts and Save the Life of a 100-Year-Old Woman106
Trial of Politician Defending Traditional Marriage Begins in Finland90
Grains of Wisdom and Piety Book Published86
150th anniversary of the establishment of the North American diocesan see in San Francisco50
Time for a Course Adjustment?31
Church from time of St. Stephen the Great becomes monastery15
Most popular authors
Pravmir.com team486
Archimandrite Markell (Pavuk)208
Saint Nicodemus the Hagiorite109
Fr. Stephen Powley31
Ștefana Totorcea15