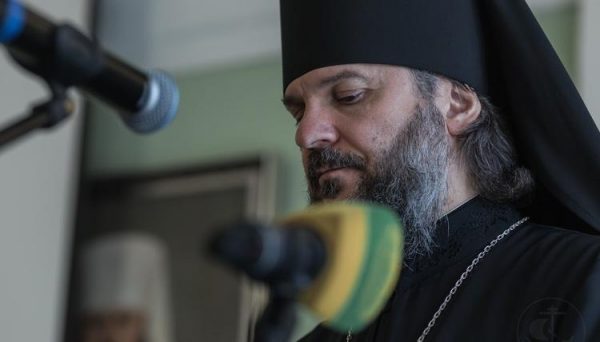 Kiev, November 8 – Archbishop Vereysky Ambrose , Rector of the Moscow Theological Academy, who was denied entry to Ukraine on Wednesday, was added to the database of the Ukrainian website Mirotvorets that same day as “a person opposing the independence of Ukrainian Orthodoxy from the Russian Orthodox Church controlled by Russia (the aggressor country).”

Mirotvorets, which was created in 2014, contains a database of personal data of people the authors call separatists or “Kremlin agents,” including data collected using illegal methods and published without those people’s consent.

The database includes Patriarch Kirill of Moscow, Patriarch of Serbia Irinej, Metropolitan Onufry of Kiev, Metropolitan Pavel, the vicegerent of the Kiev Lavra of the Caves, and some prominent archbishops and priests of the Moscow Patriarchate.

Archbishop Ambrose went to Kiev to attend services commemorating Saint Nestor the Chronicler and a ceremony at the Kiev Theological Academy. He was detained at a checkpoint at the airport because he allegedly could not confirm the purpose of his visit. Archbishop Ambrose linked the incident to Ukrainian President Pyotr Poroshenko’s statement that the Russian Orthodox Church has no business in Ukraine.

The Russian Orthodox Church said Archbishop Ambrose had been illegally denied entry to Ukraine and that the inclusion of his name in the Mirotvorets database was an attempt to justify that denial.

“The inclusion of Archbishop Ambrose in the Mirotvorets database after this sad incident looks like an attempt to justify the ungrounded actions of SBU bodies, which do not fit any ideas of law,” a source in the Moscow Patriarchate told Interfax on Thursday.

The church official believes the actions of the Ukrainian border guards were forced to act as they did.

“I am confident that the Ukrainian officers understand very well that the rector of an academic establishment, who maintains brotherly relations with the Kiev Theological Academy, is not dangerous to Ukraine. However, they had no choice but to fulfill the order of their superiors, who want to penalize the Ukrainian Church for not being with the administration, but with the Orthodox people of Ukraine,” the official said.