Source: Pravmir.ru
Natalya Mihailova | 19 October 2014
October 17, 2014. The Russian Orthodox Church is considering the possibility of rehabilitating people of no fixed abode on the premises of monasteries and churches. 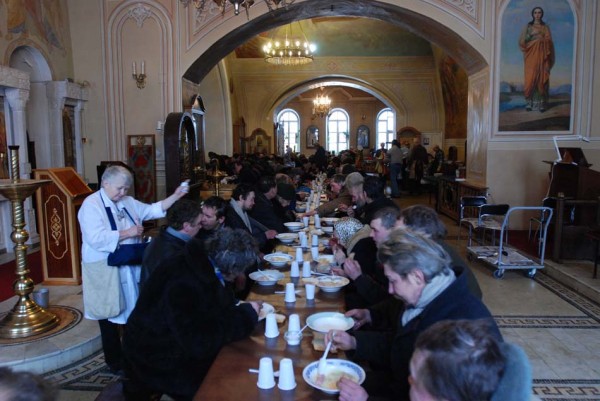 Izvestia, the Russian newspaper, has reported that the Church supports the idea of creating a “return community” for the homeless, which was suggested by one Moscow official.

According to Ilia Kuskov, Chairman of the Helping the Homeless Movement of the Synodal Charity Department, monasteries can provide the homeless with overnight accommodation, food, and work; the possibility of talks between them and representatives of the Church and psychologists is also being discussed.

Ilia Kuskov believes this initiative can be implemented; however, federal funding is needed for this purpose. He pointed out that help for the homeless should come in an integrated manner.

“Talks with the homeless should take place, which can be conducted by clergymen and psychologists. In addition, occupational therapy is essential,” Mr. Kuskov mentioned. “There is an excellent example of a particular rehabilitation center on the premises of the Nilov Hermitage in Tver. There the homeless manage to return to normal life thanks to the normal living conditions they have been provided with and a choice of work. Nobody is forced to do anything, but are free to choose activities – which is why there are favorable results. It’s crucial to consider people’s skills and professions in recruitment.”