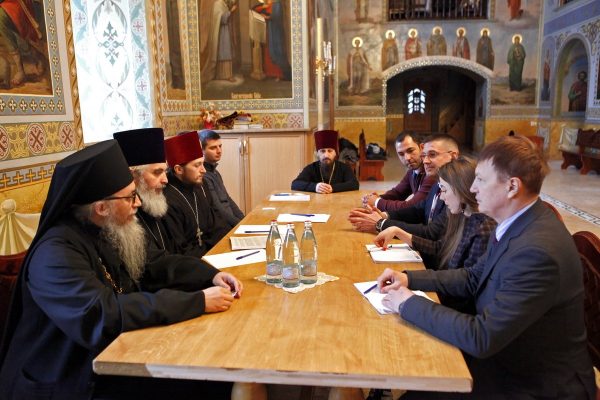 On February 11, 2019, monks and clergy of the Ukrainian Orthodox Church diocese of Ternopol met at the Pochaev Laura of the Dormition with representatives of the OSCE special monitoring mission to Ukraine to consider problems concerning the religious life in the diocese and the situation which has developed around the Pochaev Laura, the monastery website reports.

The meeting dealt with pressing problems related to the legal relations between the state and the Church and violations of the rights of the faithful. In particular, facts were given about forceful captures of churches belonging to the Ukrainian Orthodox Church perpetrated by supporters of the new religious structure (‘OCU’). The mission was given materials proving the violations of rights and freedoms of the faithful of the Ukrainian Orthodox Church.

The sides agreed to continue their cooperation for the sake of ensuring inter-confessional peace and stability in the country.

The following day, the representatives of the OSCE monitoring mission met with Archbishop Varsonofy of Vinnitsa and Bar. According to the reports of the diocesan press service, the ruling bishop told them about the grave inter-confessional situation in the Vinnitsa diocese and the cases of oppression and discrimination against the Ukrainian Orthodox Church.

The archbishop told the mission representatives about the facts forceful actions carried by OCU supporters against parishioners and clergy. He also spoke about the violation of rights and freedoms of citizens, in particular, the coercive transfer of parishes to the newly created structure.

Meanwhile, the raids to capture churches of the canonical Church continue. According to the diocese of Volhyn press service, on February 12, after a long confrontation at the churchyard, supporters of the ‘move to the OCU’, in the presence of law enforcement officers, cut off the seals from the door of the St. George church of the Ukrainian Orthodox Church and broke the door. The community of the St. George church led by the rector tried to defend the church but the raiders used their numerical advantage.