OSCE conference on discrimination and intolerance towards Christians

Source: DECR
Natalya Mihailova | 20 May 2015
May 18, 2015 – A conference took place in Vienna on ‘Enhancing Efforts to Prevent and Combat Intolerance and Discrimination against Christians, Focusing on Hate Crimes, Exclusion, Marginalization and Denial of Rights’. 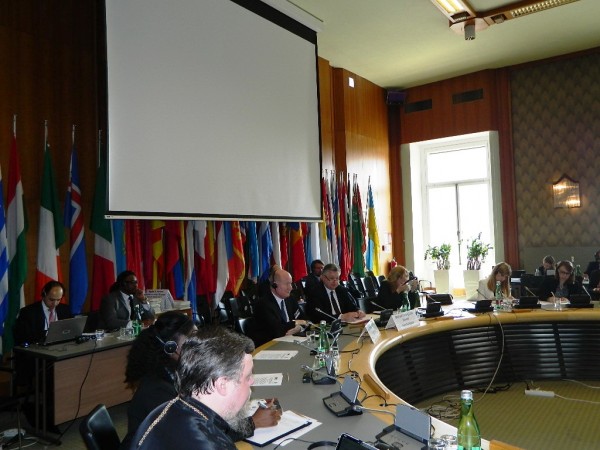 It was organized by the OSCE Office for Democratic Institutions and Human Rights (ODIHR) and attended by representatives of the OSCE member states, religious communities and other non-governmental organizations. Among the speakers were Archpriest Vsevolod Chaplin, head of the Moscow Patriarchate department for church-society relations and member of the OSCE Consultative Council on Freedom of Religion or Belief, Rev. Dimitry Safonov, head of the Moscow Patriarchate department for external church relations section for interreligious contacts, and Ms. Ye. Agapova, vice-chair of the Imperial Orthodox Palestine Society.

In his address, Archpriest Vsevolod Chaplin spoke on a number of problems experienced by Christian communities in the OSCE region. Among them is defilement of objects and symbols honoured by Christians, hate speech towards Christians, aggressive challenges from militant secularism and ‘intolerance for the sake of tolerance’. He maintained that these problems have arisen first of all because many do not want to see Christians restoring and strengthening their influence on social processes. 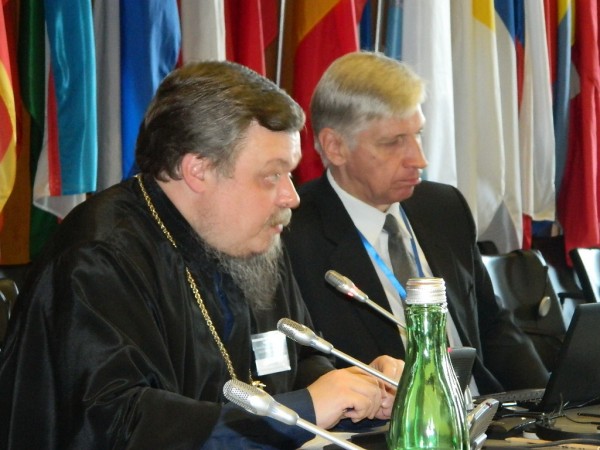 In this connection, Father Vsevolod reminded the conference that Article 4 of the Declaration on the Elimination of All Forms of Intolerance and of Discrimination Based on Religion or Beliefs, adopted by the UN General Assembly in 1981, states, ‘All States shall take effective measures to prevent and eliminate discrimination on the grounds of religion or belief in the recognition, exercise and enjoyment of human rights and fundamental freedoms in all fields of civil, economic, political, social and cultural life’.

‘Very often’, he said, ‘Christianophobia and hate speech towards Christians are manifested when Christians declare and realize their right to participate in social processes. They have the same right and that in equal measure as supporters of materialism, socialism, capitalism, ecological thinking, conservatism, liberalism or any other philosophical or political doctrine. In most legal systems today, worldviews are equal, and it means that their bearers should have equal opportunities to influence society, to define its future, its structure, character and order. Many Christians believe that they are called to make a valid and resolute impact on any processes taking place in the spheres of social, economic and cultural life. The denial of this right, the calls to prevent any religious influence on society, to make the public space ‘free’ from religion and its symbols is a clear urge towards discrimination’.

Father Vsevolod spoke at length on problems of education, calling to observe the rights of believing parents and children to have the school education corresponding to moral and religious principles held by their families. He reminded the conference that the International Covenant on Civil and Political Rights adopted by the UN General Assembly in 1961 states, ‘The States Parties to the present Covenant undertake to have respect for the liberty of parents and, when applicable, legal guardians to ensure the religious and moral education of their children in conformity with their own convictions’. In its turn, Article 5 of the Declaration on the Elimination of All Forms of Intolerance and of Discrimination Based on Religion or Belief states, ‘Every child shall enjoy the right to have access to education in the matter of religion or belief in accordance with the wishes of his parents or, as the case may be, legal guardians, and shall not be compelled to receive teaching on religion or belief        against the wishes of his parents or legal guardians, the best interests of the child being the guiding principle’.

Father Vsevolod called for a systemic analysis of the problems involved in the discrimination and intolerance towards Christians and called the OSCE member states to undertake to solve these problems.

In his address, A. Viktorov, director of the Russian Ministry of Foreign Affairs department for humanitarian cooperation and human rights, stressed that ‘beginning from the previous OSCE high-level conference in 2011 in Rome, this organization has been increasingly aware that Christianity, its holy places and adherents are subjected to persecution, violence and discrimination in the OSCE space. And the manifestations of intolerance and discrimination are seen even in the OSCE member states in which Christians comprise a majority. Among these manifestations are attacks on clergy, opposition to religious events, destruction and defilement of Christian churches and cemeteries, attempts to remove religious symbols from public places, infringement on Christians’ freedom of expression, discrimination in economic life and other spheres. There are increasing vandal acts, arsons, theft of Christian valuables and cultural heritage objects. Some mass media, under the cover of freedom of expression, dare mock at Christian values. The positive discrimination of some religious minorities leads to the violation of rights of the Christian majority. It often comes to absurdity as it is forbidden to wear religious symbols, to install Christmas trees, etc. Not the least role in the growth of these negative tendencies is played by aggressive Western neo-liberalism and militant secularism aimed at undermining spiritual, moral and traditional foundations of society. In addition, disbalances in implementing the policy of multiculturalism against the background of increasing immigration have led to the neglect of the role and importance that Christianity had in the historical process of formation of common European values which served as the foundation of European integration’.

Ms. Agapova, in her remarks, drew the attention of the conference to the suffering of Christians in the Middle East and North Africa and in south-east Ukraine.