Source: DECR
Natalya Mihailova | 04 April 2016
On 28 March 2016, over 1200 people gathered at the Catholic Cathedral of Ss Michael and Gudula in Brussels to commemorate the victims of the airport and metro terror attacks and to express solidarity with all those whom the tragedy has affected. 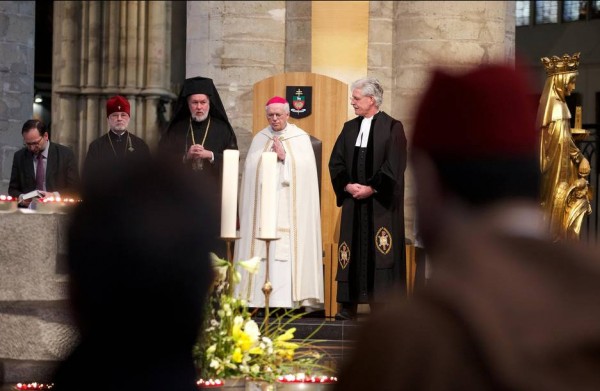 The commemoration, which was arranged by the leaders of the Catholic, Orthodox, Anglican and Protestant Churches of Belgium, gathered together the injured, the relatives of the victims, firemen, policemen, the Red Cross staff, and the Zaventem airport personnel who were the first to help the victims on that tragic day. 300 oil lamps were lighted in memory of the victims.

Attending the ceremony were also representatives of the Belgian authorities, members of the diplomatic corps, and leaders of Jewish and Muslim communities.

Most viewed articles
Living with Cunning People135
When Apples Are Sometimes Oranges88
The Tree Heals the Tree70
The Synodal Residence in New York hosts the Council of Bishops of the Russian Orthodox Church Outside of Russia59
The work of the Church in society is quiet, but full of hope and love, says the Director of Lumina Publications56
Patriarch Kirill: The Church Prays for the Fraternal Strife to End as Soon as Possible49
Besides intellectual instruction, young people also need prayer, Patriarch Daniel says as new academic year begins28
Voluntary Blood Donation Takes Place in Churches in Serbia26
Most popular authors
Fr. Andreas Agathokleous135
Pravmir.com team134
Archpriest Michael Gillis88
Archpriest Stephen Freeman70
Ștefana Totorcea56
Aurelian Iftimiu28