Requiem service for people who died of aids celebrated in Moscow

Source: DECR
Natalya Mihailova | 20 May 2015
On 17 May 2015, the International AIDS Memorial Day, Archimandrite Philaret (Bulekov), vice-chairman of the Department for External Church Relations of the Moscow Patriarchate, celebrated a requiem service at the Church of the Holy Resurrection in Moscow. Concelebrating with him were archpriest Igor Yakimchuk, rector of the church, and clerics of the parish. 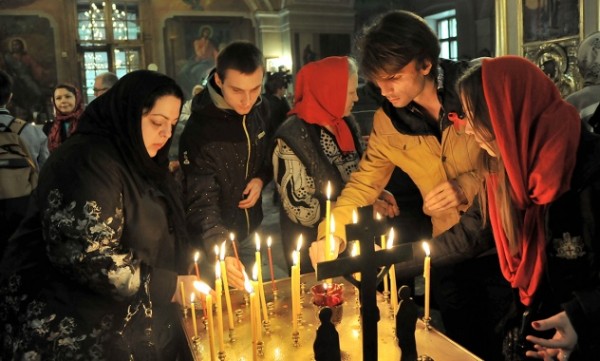 Among those who attended the commemorative service was Ms Anna Popova, head of the Federal Service for Surveillance on Consumer Rights Protection and Human Wellbeing, Ms Margarita Nelyubova, DECR staff member, as well as sisters of mercy and civic activists working to prevent the spread of HIV/AIDS.

Addressing those present before the service, Archimandrite Philaret reminded them that many of those affected by the disease faced prejudice and misunderstanding. “Our duty is to give to those who have passed away what they need most – our prayer and compassion, since it is never too late to pray for them to God,” the DECR chairman said.

Speaking to the mass media representatives, Ms Anna Popova, head of the Federal Service for Surveillance on Consumer Rights Protection and Human Wellbeing, noted that the Russian Orthodox Church contributed greatly to the prevention of the spread of HIV and the protection of those affected by this epidemic.

According to the data of the Federal Service for Surveillance on Consumer Rights Protection and Human Wellbeing, some twenty thousand HIV-infected people die in Russia every year, most of them under the age of 40.

The Russian Orthodox Church has always taken care of the suffering and the sick. “The Church points out that the problem of the spread of HIV/AIDS lies not so much in medical sphere as in morality of our society,” archpriest Igor Yakimchuk said and added that the Russian Orthodox Church took pastoral care of HIV/AIDS-infected people, providing palliative assistance to them, organizing telephone hotlines, taking preventive measures, and popularizing moral and family values in society.