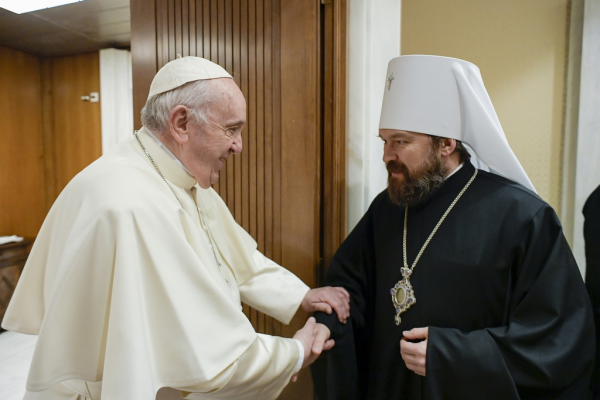 Photo by the Vatican Press Service

On December 22, 2021, Metropolitan Hilarion of Volokolamsk met with Pope Francis of Rome at the Paul VI Audience Hall in the Vatican.

In the beginning of the conversation, Metropolitan Hilarion, speaking on behalf of His Holiness Patriarch Kirill of Moscow and All Russia, congratulated the Primate of the Roman Catholic Church on his 85th birthday.

Pope Francis greeted His Eminence and expressed cordial gratitude to His Holiness Patriarch Kirill for the congratulation and for the invariably high level of cooperation.

During their prolonged meeting held in a warm atmosphere, the sides discussed a wide range of issues standing on the agenda of the bilateral relations between the Roman Catholic Church and the Russian Orthodox Church, as well as particular aspects of interaction in the nearest future.

In conclusion of the meeting, Metropolitan Hilarion conveyed to Pope Francis the congratulatory message from His Holiness Patriarch Kirill of Moscow and All Russia and an Icon of the Mother of God of the Sign. Presenting this gift, the DECR chairman stressed that this icon is held especially dear by the Primate of the Russian Orthodox Church, since the church of the St. Petersburg Theological Academy, which he graduated and of which he was rector for ten years, keeps a venerated copy of this image of the Most Holy Mother of God.