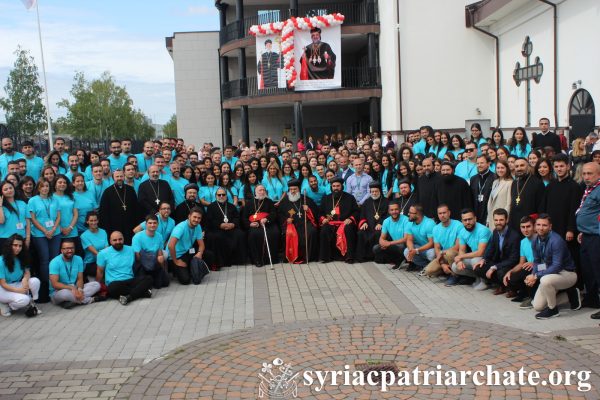 The Suryoyo Youth Global Gathering (SYGG) of the Syriac Orthodox Church was held from July 31 to August 5, 2019, in Stockholm. It brought together over 250 participants from Lebanon, Sweden, Germany, Austria, France, Belgium, Holland, Great Britain, USA, Canada and Australia.

The forum was presided over by the Primate of the Syriac Orthodox Church, His Holiness Patriarch Mar Ignatius Aphrem II. Archbishop Anthimos Jack Yacoub, Patriarchal Vicar for Youth Affairs and Christian Education, acted as its moderator. It was also attended by a number of hierarchs and clergy of the Syriac Orthodox Church from around the world, as well as His Eminence Angaelos, Coptic Orthodox Archbishop of London, and Mr. Blanchard, Director General of the Christians of the East, a French public organization.

With a blessing of His Holiness Patriarch Kirill of Moscow and All Russia and at the invitation of the Primate of the Syriac Orthodox Church, a delegation of the Moscow Patriarchate visited the congress in pursuance of the agreements reached at the second meeting of the Commission for Dialogue between the Russian Orthodox Church and the Syriac Orthodox Church in February 1029 in Atchaneh, Lebanon. The delegation included Rev. Alexiy Solovyov, assistant to the chairman of the Synod Youth Department; D. Savitsky, head of the press service of this department, and S. Alferov of the DECR.

The program of the congress included visits to local parishes of the Syriac Orthodox Church, young people’s meetings and spiritual talks with the Patriarch and clergy, trainings in working groups, sports games and cultural parties with the singing of traditional hymns.

On his part, Patriarch Aphrem II cordially welcomed the guests noting that his meetings with delegations from Russia already became a good tradition. His Holiness gave a high value to the work of the Commission pointing especially to the dynamically developing humanitarian cooperation maintained through the Interreligious Working Group for aid to the Syrian population working under the Russian Presidential Council for Cooperation with Religious Associations. His Holiness also expressed hope that the initiated interaction between the two Churches in the area of youth service would be as pro-active and fruitful.

The delegation also had a substantial talk with the head of the Synodal Youth Department of the Syriac Orthodox Church, Archbishop Anthimos Jack Yacoub. They discussed further prospects for joint work, which could include a regular exchange of youth delegations and participation in issue events held both in Russia and in Moscow Patriarchate dioceses abroad.

Archbishop Anthimos Jack Yacoub also gave an interview for the portal of the Synodal Youth Department.

The Suryoyo Youth Global Gathering (SYGG) of the Syriac Orthodox Church has been held annually since 2015 with a blessing of His Holiness Patriarch Ignatius Aphrem II who initiated this forum. Its main aim is to maintain friendly relations with young believers who live in various countries of the world and to introduce them to spiritual traditions and culture of their ancestors. The motto of the present congress are the words of St. Paul from the Letter to the Colossians “Rooted in Him” (Col. 2:7). The next gathering is planned for summer 2020 in Lebanon.