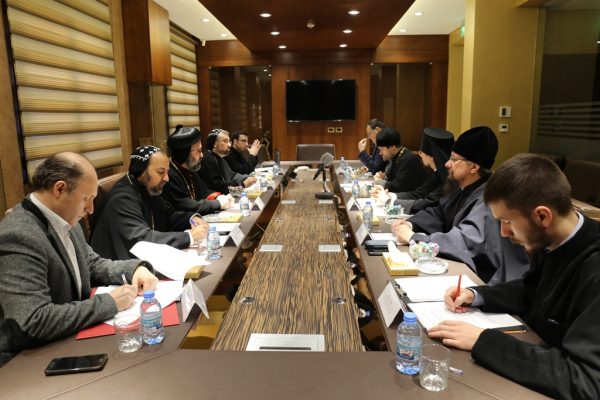 The Moscow Patriarchate membership in the Commission includes Bishop Flavian of Cherepovets and Belozersk (Co-chairman); Hegumen Arseny (Sokolov), representative of the Patriarch of Moscow and all Russia to the Greek Orthodox Patriarch of Antioch and all the East; Hieromonk Stefan (Igumnov), secretary for inter-Christian affairs, Department for External Church Relations of Moscow Patriarchate (DECR); Mr. Sergey Alferov and Mr. Evgeny Bakhtin, DECR Staff members.

In the beginning of the meeting, Archbishop Chrysostomos asked Bishop Flavian to convey congratulations to Patriarch Kirill of Moscow and All Russia from Patriarch Ignatius Aphrem II on the recently celebrated 10th anniversary of his Primatial ministry.

The sides summed up the implementation of the agreements concluded at the First Session of the Committee and determined the further program of cooperation to be approved by the Church Authorities.

The Commission’s work to coordinate interaction in implementing projects for aid to suffering Christians in Syria, among whom is thousands-strong flock of the Syriac Orthodox Church, remains the priority for it. It was stated with satisfaction that a number of projects were successfully realized in 2018. Among them, the trip of a delegation of the Working Group for Aid to People in Syria of Russia’s Presidential Council for Cooperation with Religious Organizations to Syria and Lebanon and the distribution of a large food supply there last February; the initiative of the Russian Orthodox Church to launch a medical rehabilitation program for disabled children – victims of the hostilities in Syria; and the conference of heads and high representatives of religious communities in Syria and Russia held during the visit to Damascus of Metropolitan Hilarion of Volokolamsk, head of the Moscow Patriarchate department for external church relations, with the participation of Patriarch Mar Ignatius Aphrem II. The conference considered plans for continuation of the cooperation in this area, also with the participation of the St. Ephrem Patriarchal Development Committee, which supervises humanitarian projects of the Syriac Orthodox Church.

Another topical area of joint work is the development of relations in the academic sphere. It was noted as important the participation of a representative of the Russian Orthodox Church, Hegumen Arseny (Sokolov), in the symposium organized by the Department of Syriac Studies on the personality of Severus of Antioch (Atchaneh, May 25, 2018). This year, delegates from Syria are expected to attend academic theological conferences to be organized by the Moscow Patriarchate higher educational institutions. Concrete agreements were reached on the beginning of a students’ exchange program. It is planned to develop in the future the direct cooperation between theological schools, in particular, between those of the Russian Orthodox Church and the St. Ephrem Theological Seminary in Seidaya and the Syrian Antioch University, which was opened in November 2018 in Damascus as the first university of the Syriac Orthodox Church to train not only clergy but also laity for work in humanities, and natural science and technology disciplines.

The Commission considered it topical to promote the establishment of contacts between respective structures responsible for developing youth service through exchange of delegations and joint participation in issue activities including in the diaspora dioceses.

The sides also discussed prospects for interaction between monastics and development of pilgrimage programs, pointing to the positive experience of trips organized by the Moscow Patriarchate Department for External Church Relations for pilgrim groups from the Syriac Orthodox Church to come to Russia in January and July 2018.

The Commission deemed it necessary to maintain the present level of cooperation in the media sphere, including giving mutual informational support in face of pressing challenges faced today by the Moscow Patriarchate and the Syriac Orthodox Church. The Syrian side gave a high value to the initiative of Patriarch Kirill of Moscow and All Russia to hold a consultation with Primates of Churches in East and West to adopt a joint statement during the aggravation of the situation in Syria in April 2018. Among other significant manifestations of this interaction was the concurrent wide distribution by the DECR Communication Service of the Joint Statement of His Beatitude Patriarch John X of Antioch and All the East, His Holiness Patriarch Ignatius Aphrem II and His Beatitude Melkite Patriarch Jousseff Absi.

The participants pointed out the importance of the activation of contacts between the Russian Orthodox Church and the community of the Syriac Orthodox Church in Iraq, which took place in 2018. Archbishop Mor Nicodemus Daoud Sharaf of Mosul, Kirkuk, Kurdistan and Environs visited Moscow in November 2018, as a member of the Council of Iraq Christian Leaders. Earlier, in March of the same year, Hieromonk Stefan (Igumnov), at the instruction of Metropolitan Hilarion of Volokolamsk, visited Baghdad and Erbil, where he held working meetings with heads and representatives of local Syriac Orthodox communities.

In conclusion of the session, a joint Memorandum was adopted.

During their stay in Lebanon, the Moscow Patriarchate delegation visited the Monastery of the Dormition in Balamand, which belong to the Orthodox Church of Antioch, and the Theological Institute located in its territory, in which the delegation, with the blessing of Patriarch John X, was received by Metropolitan Ephraim of Tripoli. Bishop Flavian asked them to convey cordial greetings to Patriarch Kirill of Moscow and All Russia and Patriarch John X of All the East and told them about the progress made in the dialogue with the Syriac Orthodox Church. On his part, Metropolitan Ephraim noted that the Balamand monastery is still cherishes the memory of the visit made by the Primate of the Russian Orthodox Church to the Patriarch of Antioch in November 2011. An exchange of opinions took place on pressing problems of bilateral and inter-Orthodox cooperation.

The program of the Commission session included visits to holy places and historical and cultural sites in Lebanon, including the St. George Cathedral of the Metropolis of Beirut of the Orthodox Church of Antioch, the Saydet el Nourieh and the St. Elias Orthodox monasteries, as well as the city of Byblos.

The next session of the Commission is to take place in summer 2020 in Russia.