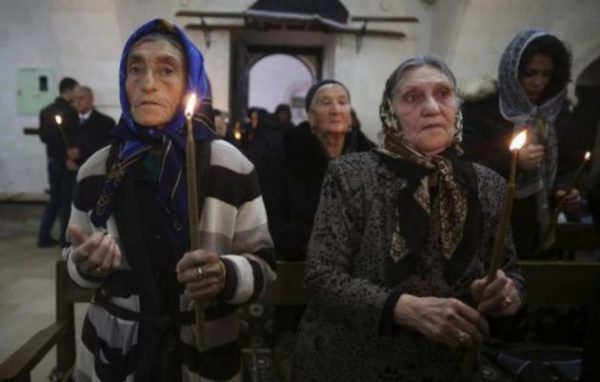 (Reuters/Umit Bektas) Syriac Christians from Turkey and Syria attend mass at the Mort Shmuni Syriac Orthodox Church in the town of Midyat, in Mardin province of southeast Turkey. February 2, 2014.

The instability in Syria has provided the Syriac-Assyrian Christians an opportunity to be educated in their mother tongue, as they were previously only allowed to learn using the Arabic language. They recently launched a language center called the Ourhi Centre in Qamishli in Hasaka in a bid to train potential teachers who will help revive their ancient language, ARA News details.

“Our centre is responsible for training teachers specialised in the Syriac language to enable them teach different subjects in this language,” Ourhi Centre director Jan Malfon told ARA News in an interview. “This is the first time ever that our community launches its own language and cultural centre.”

In addition, the new school curriculum will include the teaching of Assyrian and several other languages. Syriac student Mirna Saliba said the changes in the curriculum would help provide them with a better understanding of their history and culture, which they in turn will pass on to the next generations. She added that it will help preserve their mother tongue.

Western Aramaic, the ancient language that Jesus spoke, was used in the mountainside village of Ma’loula (or Maaloula) in the southwestern region of Syria until a few years ago. In 2013, extremists including Al-Qaeda conquered the village and demolished the ancient monasteries Mar Sarkis and Mar Thecla, where Aramaic prayers used to be recited for visitors ,Current in Carmel reports.

In April 2014, Syrian and Hezbollah troops managed to retake Ma’loula. They also began efforts to restore the destroyed religious sites and recover the items that the extremists looted. Jesus’ ancient language may have been silenced for a while, but there is now a glimmer of hope that the residents of the village could once again pray in Aramaic inside their churches.