Source: Basilica.ro
His Eminence Metropolitan Nicolae Condrea laid the foundation stone for a new church dedicated to one of the most beloved Romanian Saints, Venerable John Jacob (the New Chosebite) of Neamt, on June 17, 2019.
Aurelian Iftimiu | 26 June 2019 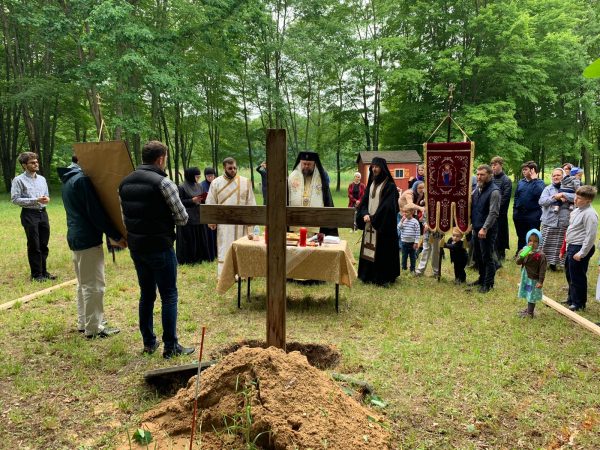 The new church will serve the monastic community of the Dormition of the Theotokos Monastery, which recently relocated from New York to Allegan, Michigan.

The foundation stone laying ceremony was led by His Eminence Metropolitan Nicolae of America on Whit Monday.

Following the ceremony, the Romanian Metropolitan blessed the brotherhood and presented them with an icon of Saint Irodion of Lainici.

Saint John Jacob of Neamt was appointed as second patron saint of the monastery when it was still located in New York and the Hieroschemamonk Iacob Barsan, a spiritual “grandson” of Saint John Jacob, visited the monastery and offered the Saint’s monastic belt as a blessing.

Saint John Jacob is considered a Patron of the Romanian Diaspora.

The monastery’s spiritual director, hieromonk Atanasie Popescu, has recently discovered in the archive of the Metropolis many letters belonging to Saint John Jacob addressing the late Archbishop Victorin Ursache, as well as other letters of one of the Saint’s disciples, monk Ioanichie Paraiala, which will be published in the near future.

Venerable John Jacob the New Chosebite reposed in 1960 and was glorified by the Holy Synod of the Romanian Orthodox Church in 1992. He is celebrated on August 5.

Photography courtesy of the Romanian Orthodox Metropolis of the Americas

It is not enough to know the Creed. We must also pray for the unity of the Church, Patriarch Daniel says

On the seventh Sunday of Pascha, His Beatitude Patriarch Daniel spoke about the First Ecumenical Council of Nicaea,…

Patriarch Daniel: “In the family, the child understands the mystery of God’s love”

His Beatitude Patriarch Daniel has published a message occasioned by the Sunday of Parents and Children, marked this…