Romanians Offered Bulgarians a Second Vestment of St. Paraskeva and 30 Tons of Food 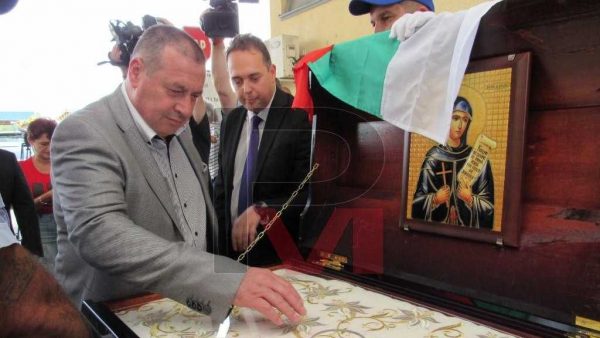 Over 30 tons of non-perishable foods and a vestment which covered for a while St. Paraskeva’s relics in Iași were delivered on Friday to Bulgarians in Ruse by representatives and volunteers of  Romanian organizations.

The donation document for the saint’s vestment was signed by Metropolitan Teofan of Moldavia and Bukovina. The gift was received by Metropolitan Naum of Ruse in a short ceremony organized at the customs point.

Then the vestment was carried in procession to St. Demetrius the New’s Monastery in Basarabovo. The final destination would be Koprivets Monastery in Biala, Bulgaria, whose patron is St. Paraskeva.

A first vestment was offered two years ago for the saint’s church in Ruse.

“I wish to express my gratitude towards Patriarch Daniel, who gave the blessing for us to receive another vestment which covered the incorruptible body of our Venerable Mother Paraskeva – Petka. St. Paraskeva is especially honoured in Bulgaria since her relics were kept for a time in the cities of Târnovo and Vidin,” said Metropolitan Naum of Ruse.

The Bulgarian hierarch also expressed his gratitude towards the metropolitans of Moldavia and Transylvania.

Archim. Antim Manuilov, Administrative Auxiliary of the Metropolis of Vidin, thanked for the food donation. “It is known that the north of Bulgaria, especially the Vidin eparchy, is very poor,” he said.

The food gifts came accompanied by the paramedic volunteers of the Free Union Association 2015 RAT Brașov, by the president of the Federation of Romanian Transporters and Public Service, Ion Zbârnea, and by members of St. Mary’s Christian Orthodox Military Order, commanded by Liviu Pandele.

The food was brought in vehicles of the Federation of Romanian Transporters and Public Service, which sponsored the acquisition together with “Aurel A. Mureșianu” Cultural Association in Brașov.

The food left on Friday night towards the Romanian-Bulgarian families in the regions of Ruse and Vidin, who have very limited resources.