Source: Basilica.ro
Archaeological excavations uncover vast Bronze Age city, one of the first and largest of the ancient Near East, as well as a temple.
Mihail Mere-Albe | 09 October 2019 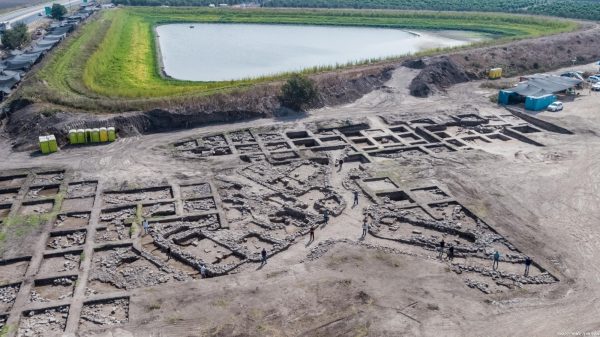 A vast city dating from 5,000 years ago was uncovered during extensive excavations by the Israel Antiquities Authority (IAA) with the aid of approximately 5,000 Jewish and Arab teenagers and other volunteers participating in the IAA’s Sharing Heritage Project.

The excavations, in progress for two and a half years at the planned Harish interchange near Wadi Ara in the Haifa area, have revealed a city stretching over 650 dunams (160.6 acres) accommodating around 6,000 inhabitants.

An even earlier settlement, dating to the Chalcolithic period from 7,000 years ago, was uncovered beneath this city’s houses. It is is the largest and the most central ancient city ever uncovered in Israel.

In the public area of the city, archaeologists discovered an unusual ritual temple. In its courtyard stood a huge stone basin for liquids used during performance of religious rituals.

A facility containing burned animal bones — evidence of sacrificial offerings — as well as rare figurines, including a human head with the seal impression of a man with hands lifted and next to him the figure of an animal, were uncovered inside the temple.