Source: RIA Novosti
Natalya Mihailova | 28 July 2014
MOSCOW, July 28 (RIA Novosti) - One hundred children from Damask's Orthodox shelters in the St Techla monastery Christian village of Maaloula are expected to arrive in Moscow on Monday for a two-week vacation in one of Russia's recreation camps, the project's organizers told RIA Novosti. 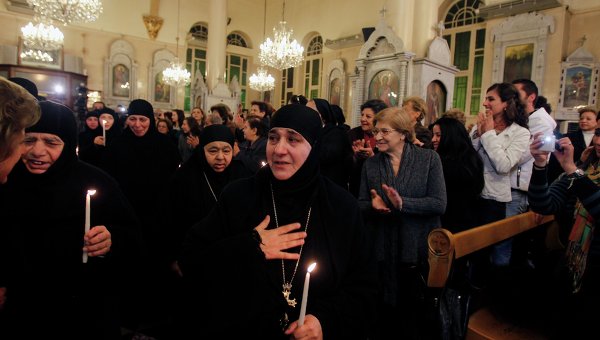 “I am certain that the Syrian children will remember their stay in a Russian recreation camp for their whole lives,” said Vladimir Yakunin, the head of the Center of National Glory fund supervisory board.

He said he hoped the children “will be able to distract from the horrible events that befell upon them.”

The children are expected meet with the Patriarch Kirill of Moscow and all Russia, have a tour around Moscow, participate projects and do sports.

The Center, together with the Andrei Pervozvanny fund, has already arranged holidays for children from hot spots in the past – it brought some 540 children from Kosovo and Metohija 10 years ago.

Some 1,600 schools and more than half of all hospitals have been completely or partially destroyed in the three years of conflict in Syria. More than 9 million refugees inside Syria and more than 2 million in the neighboring countries are currently in need of help, according to the UN estimates.

The number of Syrian children living in poverty reached 6.6 million in June 2014, according to United Nations children’s fund UNICEF.

Russia has assisted Syria in the past. In 2013, Russian Emergencies Ministry sent 200 tons of humanitarian aid to Syria, Lebanon and Jordan. In return, Syrian authorities decided to introduce the Russian language into schools starting in the school year of 2014/15.