Source: Interfax-Religion
"You are the future of Syria, you must build a powerful and free state so that no one could ever seek to destroy it. Keep the faith in your hearts, pray to the Lord, study well to become spiritually and physically strong people."
Natalya Mihailova | 02 August 2014
Moscow, August 1, Interfax - Patriarch Kirill of Moscow and All Russia spoke to Syrian children who came from Syria for summer holidays in a Russian children's recovery camp. 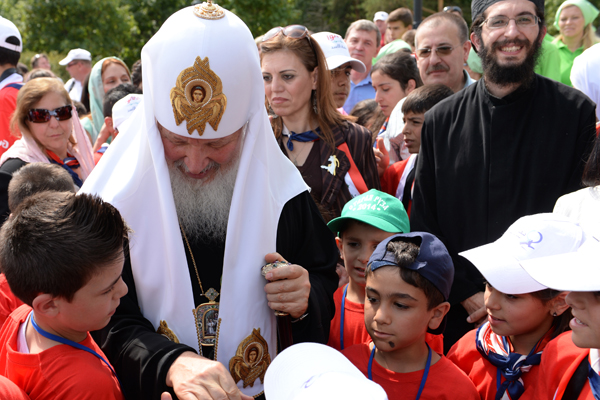 “We know how unfairly your people suffer. However, we adore an ability of your people to stand for their freedom and independence. Your parents and elder brothers defend your Motherland with weapon in hands. We adore their courage,” Patriarch Kirill said Friday addressing Syrian children after the liturgy celebrated at St. George Church in the Poklonnaya Hill.

The primate said that many peaceful citizens, including women, old people and especially children were suffering in Syria.

“We help as we can. We are pleased to welcome you in Russia. You are the future of Syria, you must build a powerful and free state so that no one could ever seek to destroy it. Keep the faith in your hearts, pray to the Lord, study well to become spiritually and physically strong people,” he urged.

The patriarch gave children toys and thanked those who arranged their trip to Russia, greeted nuns and other people who accompanied them.

As was reported, 100 children came to Russia by efforts of St. Andrew the First-Called Foundation and the National Glory Center. The group consists of the pupils from boarding schools for children of killed soldiers and from Orthodox orphanages of Damask, the Valley of Christians, and orphanage at St. Thekla Monastery in Maaloula.