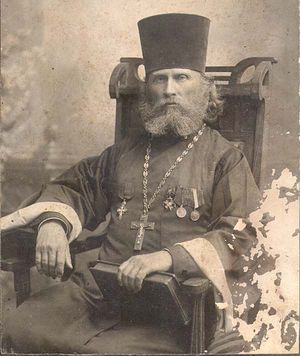 Meeting in Moscow under the chairmanship of His Holiness Patriarch Kirill today, the Holy Synod of the Russian Orthodox Church resolved to add another name to the Synaxis of New Martyrs and Confessors of the Russian Church.

Bishop Pankraty, the Chairman of the Synodal Commission for the Canonization of Saints, presented a report on the petition received from Metropolitan Zinovy of Saransk and Mordovia for the inclusion of Archpriest Theodore Kallistov among the New Martyrs, after which the Synod resolved to add his name, thus glorifying him among the saints, according to the official report from today’s Synod meeting.

The memory of St. Theodore will be celebrated annually on August 21/September 3, the day of his martyrdom. In the case of the uncovering of his relics, they are blessed for veneration, and icons of the newly-glorified saint are to be painted, according to the norms of the 7th Ecumenical Council.

Archpriest Theodore Kallistov was born on April 17, 1865 in the Penza Governorate in the family of a deacon. He graduated from Penza Seminary in 1886 and began to serve as a psalm-reader. He was ordained as a deacon and priest in 1887 after he was married.

He served in various churches throughout the Penza Governorate and was engaged in both spiritual and secular education. He had 14 children. In 1916, he was transferred to the Cathedral of the Lifegiving Trinity in Troitsk, and in 1922 was elevated to the rank of archpriest.

The last years of his life were filled with sorrows and deprivations. In the 1930s, the soviet authorities did all they could to close the church. On February 28, 1930, Fr. Theodore was detained and accused of anti-soviet activities, though he pleaded not guilty. On October 3, 1930, he was sentenced to three years’ exile in Western Siberia and the Trinity Church was closed.

He returned to Troitsk in 1933 and reopened the church. It was closed again in 1935 under pretext of non-payment of taxes for the building. Fr. Theodore managed to reopen the church, but he was again arrested on August 14, 1937. Fr. Theodore bravely held his tongue, naming no names and admitting no charges.

On September 3, 1937, Archpriest Theodore Kallistov was shot for supposed anti-soviet terrorist agitation and calling for a revolution.