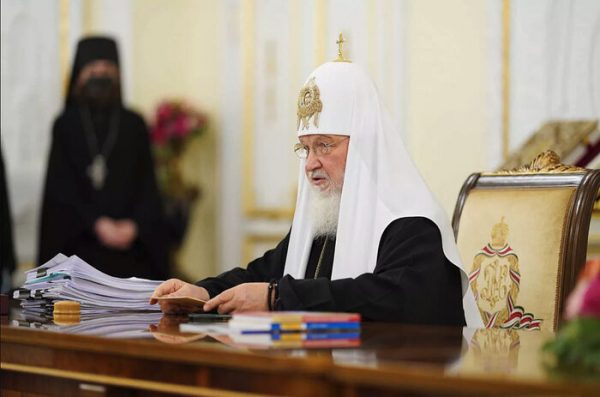 The Holy Synod of the Russian Orthodox Church met under the chairmanship of His Holiness Patriarch Kirill in Moscow yesterday.

Among its decisions, the Synod resolved to receive 102 African priests into its jurisdiction at their request, reports Patriarchia.ru.

The Synod heard a report from His Eminence Archbishop Leonid of Yerevan and Armenia on the appeals of numerous clergy from throughout Africa who reject Patriarch Theodoros of Alexandria’s recognition of the Ukrainian schismatics and therefore want to come under the Russian Church.

With the blessing of Patriarch Kirill, Archbishop Leonid recently traveled to Africa and met with many of the appealing priests. Today, at least 100 parishes of the Patriarchate of Alexandria, together with their priests, have declared their desire to move to the Russian Church. Many of them first appealed in 2019, after Patriarch Theodoros first began commemorating the schismatic head of the OCU, “Metropolitan” Epiphany Dumenko.

After Patriarch Theodoros liturgically concelebrated with Dumenko in August, the Russian Church Holy Synod decided it could no longer ignore the priests’ appeals.

Thus, having heard Archbishop Leonid’s report, the Synod officially resolved “to accept 102 clerics of the Patriarchate of Alexandria from eight African countries into the jurisdiction of the Russian Orthodox Church, according to the petitions submitted.”

Most viewed articles
As the End Draws Near – Silence163
How Can We Evangelize Today?145
A Stone Thrown at God and Your Neighbor116
Metropolitan Onuphry: “The Key to the Doors of Paradise is Repentance”86
Hierarchs of Three Local Orthodox Churches Concelebrate in Argentina78
Trial of Politician Defending Traditional Marriage Begins in Finland76
Patriarch Daniel prays for Romania’s national unity, peaceful coexistence and dignified cooperation with other peoples41
Most popular authors
Pravmir.com team240
Archpriest Stephen Freeman163
Frederica Matthewes-Green145
Protopresbyter Themistoklis Mourtzanos116
Aurelian Iftimiu41