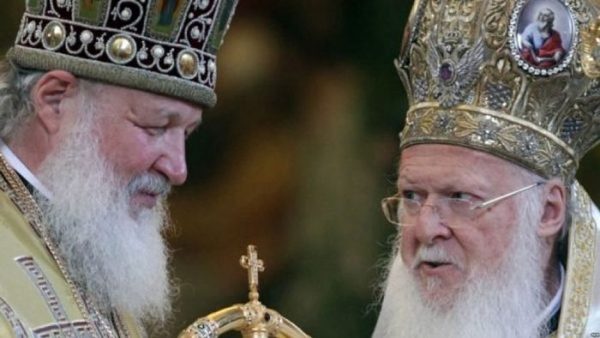 As a result of the Ecumenical Patriarch’s appointment of two exarch bishops in Ukraine without any blessing from the Ukrainian Orthodox Church, the Holy Synod of the Russian Orthodox Church resolved at its extraordinary session today that His Holiness Patriarch Kirill of Moscow and All Russia will cease commemorating His All-Holiness Ecumenical Patriarch Bartholomew of Constantinople during the Divine Liturgy.

The primates of the world’s 15 autocephalous Orthodox Churches typically commemorate one another at various points during the Divine Liturgy.

They also resolved to suspend concelebration with Constantinople hierarchs and to suspend participation in all structures chaired or co-chaired by representatives of the Ecumenical Patriarchate, as His Eminence Metropolitan Hilarion (Alfeyev), the head of the Department for External Church Relations, stated at a press briefing today, as RIA-Novosti reports.

However, these measures do not indicate a break in Eucharistic communion: “Eucharist communion between the Churches has not been interrupted. This decision does not deprive the clergy of the Patriarchate of Constantinople and the Russian Orthodox Church of the possibility of holding joint services,” explained Patriarchal Press Secretary Fr. Alexander Volkov.

The Holy Synod of the Russian Orthodox Church previously stated that it will break Eucharistic communion with Constantinople in the case that it grants autocephaly to a Ukrainian church.

His Beatitude Metropolitan Onuphry of Kiev and All Ukraine also announced at the meeting today that the canonical Church will not be meeting with the exarchs, who have already arrived in Kiev, inasmuch as they have no blessing to be on the canonical territory of the Ukrainian Orthodox Church.