Source: Interfax-religion
Natalya Mihailova | 25 October 2016
Moscow, October 24, Interfax - Works on conserving the Oak of Mamre from decay are conducted in the representation of the Russian Ecclesiastical Mission in Hevron (the West bank of the Jordan river). 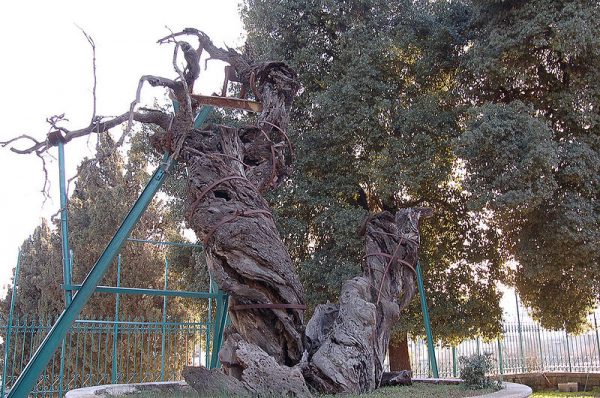 Experts of the National Scientific Center of the Russian Academy of Sciences The Nikitsky Botanic Garden, St. Petersburg Forestry University, and Lobachevsky State University of Nizhny Novgorod are attracted to participate in the work.

The Oak of Mamre is mentioned in the Bible, according to which the Holy Trinity visited Abraham near the tree.

The experts will treat the tree with special material protecting it from decay, illnesses and pests. The process is complicated as the majority of materials are brought from abroad – from Russia, Finland and other European countries. Works are often suspended as supplies of new parties of liquids are delayed due to the customs formalities.

In result of construction works held in the 1970s, when a wooden ring in form of a chalice was build around the oak, its roots started dying. Fifteen years after it the tree withered.

In 1997, a small sprig started growing near the withered oak and one of the tasks is not to inflict harm to this young tree in process of the treating the old oak.